Acura Showed Hart At This Year’s Rolex 24 At Daytona 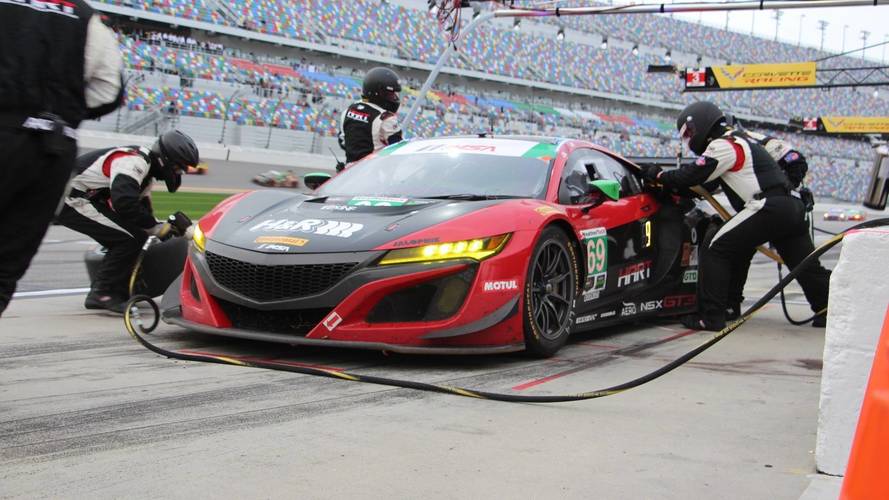 A volunteer team of Honda engineers took the NSX to Daytona and accomplished what many couldn’t.

On the banking, doing 130 miles per hour on America’s most famous race track, you realize that the Acura NSX is no ordinary sports car. Yes, it’s quiet and comfortable on the road, almost as much so as a TLX, but under the lights at Daytona, putting all 573 horses to use, it’s obvious why this car was the perfect jumping off point for Acura’s motorsports revival. It’s ready for anything, right out of the box.

The new NSX made its debut in 2016, and showed up for the first time on the track just a year later. The Rolex 24 at Daytona proved to be a tough challenge for Acura’s first endurance outing, but the team quickly found traction at other circuits around the country. Hoping for more of the same success in 2018, Acura partnered with Michael Shank Racing and Team Penske.

The teams fielded two NSX GT3s, driven by Lawson Aschenbach, Justin Marks, and Katherine Legge, and two prototypes, piloted by Ricky Taylor, Dane Cameron, Simon Pagenaud, Juan Pablo Montoya, Helio Castroneves, and Graham Rahal. By any measure, an all-star cast of drivers. But amongst the big names and bright lights, it was the quasi-grassroots effort of Honda of America Racing Team (HART), and a fifth NSX GT3, that stole the show in Daytona.

"They’re volunteers but they’re also engineers by trade... that’s our whole team it’s guys like that."

Comprised mostly of volunteer engineers from Honda’s R&D facility in Marysville, Ohio, the team recorded its first-ever finish at a Daytona 24-hour race. A 16th place finish out of 21 cars may not seem like a huge accomplishment, but the fact that this crew was able to field what was essentially a side project, and do so successfully, is a true testament to Honda and Acura engineering at work – or what Acura likes to call, "Precision Crafted Engineering."

"They’re volunteers but they’re also engineers by trade... that’s our whole team it’s guys like that," said Ryan Eversley, driver of the number 69 HART NSX. Eversley was joined by Honda Senior Engineer and part-time racer Chad Gilsinger, and pro racers John Falb and Sean Rayhall in-car, as well as an entire pit crew of volunteer engineers. "A few of those guys work with me on the engineering team," said Jason Widmer, Chief Engineer at Honda R&D Americas.

The relatively small HART team has been around since 1989, giving them nearly 30 years of experience to work with. The team’s racing career began in Civic hatchbacks, so the adoption of the NSX on one of the largest endurance stages was a pretty significant step up. But it’s nothing they haven’t seen before.

All told, nearly 70 percent of the same components carried over from the road-going NSX to the race car, which was good news for these full-time engineers that helped develop the new NSX from the ground up. More than 400 pieces on the GT3 are completely stock, and it’s even built on the same production line as the factory model.

The biggest change comes under the hood. Gone is the factory hybrid setup, per IMSA rules, and in its place is a 3.5-liter biturbo V6 paired to a 6-speed sequential transmission. Still, using the same block as the road-going model, it’s not something the HART team is unfamiliar with. The new engine is shoved further up into the body, and the engineers attach a new rear subframe to make up for all that extra space. That keeps it lighter, too; the NSX GT3 sheds nearly 900 pounds (408 kilograms) over the road car, bringing the total curb weight to just about 2,900 pounds (1,315 kilograms).

A full carbon fiber body is draped over the frame compared to the factory aluminum one. Added aero work on the front fascia keeps the NSX planted in the corners, as does that massive rear wing. It even comes with factory features like traction control, which driver Lawson Aschenbach of the Michael Shank Racing team touts for its ability to get him "out of a corner quickly."

But the connection between road and racing wasn’t limited to the NSX exclusively. Even the prototypes – like the wildly styled ARX-05 – were designed to draw connections to the consumer side of Acura.

"We did it to look like the Precision Concept," said Dave Marek, Global Creative Director at Acura. "You could look at that and say that’s an Acura, you could also look at it and say that’s a Penske car."

Even the prototypes – like the wildly styled ARX-05 – were designed to draw connections to the consumer side of Acura.

Since all prototypes ride on a similar chassis, sourced from either Dallara, Ligier, Multimatic/Riley, or Oreca (the Acura ARX-05 uses Oreca), teams have a very small window in which they can differentiate their vehicles from the rest of the field. The headlights, for example, are unique to Acura, as are some portions of the front fascia, which helps bridge the gap between racing and road cars.

All told, Acura had a successful outing. The cars were battered by the end of it, but carried on. All three NSXs and both prototypes finished the grueling endurance race. The Michael Shank Racing NSX recorded the best finish of all the Acuras in second in the GTD class, while the prototypes both finished in the top 10 overall.

With a total of five cars on the grid this year compared to just two last year – NSX GT3s and prototypes alike – Acura’s success at Daytona was a culmination of work spanning more than a year, said HPD President Art St. Cyr. And it showed. Acura’s racing team as a whole should see success down the road.