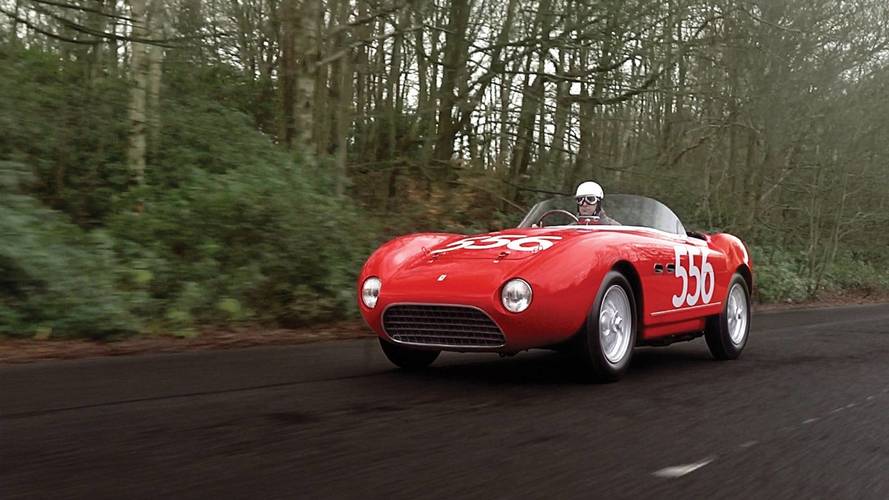 It's one of just 13 examples built.

At the upcoming RM Sotheby’s Paris auction, amongst a sea of classic Italian sports cars, one particular vehicle stands out above the rest. This handsome Ferrari 166 MM Spider will be crossing the auction block in just a few weeks, and when it does, it could go for as much as $5.6 million.

A competitor in both the 1953 and 1954 Mile Miglia, and a number of other races around the world, this classic Ferrari comes with some racing chops. Chassis number 0272 M was sold new to its first owner, Dr. Agberico Cacciari of Pinnazzio di Castelfranco, Italy, and was registered in Modena with the registration number MO 29583. It’s the fifth of just 13 examples built for 1953, and features unique Spider coachwork.

Following its racing career in Italy, the car was shipped to California where it took a starring role in the 1955 film, The Racers. The car was later sold to Pete Lovely of Tacoma, Washington, who set about repainting it with a white and gold livery, and prepping it for racing throughout 1955 and 1956.

The car was a regular at concours events like Pebble Beach, and competed in the Ferrari Historic Challenge and the Cavallino Classic in 2000. It has changed hands multiple times, moving from California, to Massachusetts, and back again, before finally finding a more permanent home in Connecticut, and retains nearly all of its original components.

The original V12 engine underwent a complete rebuild, and gained new features like an electronic ignition, an upgraded alternator, and an auxiliary electric cooling fan. The five-speed gearbox was also updated, all of the new mechanicals helping increase overall drivability at vintage events.

27 Photos
++Share
Hide press releaseShow press release
Built by Ferrari in early 1953, this 166 MM, chassis no. 0272 M, was sold new to its first owner Dr Alberico Cacciari of Pinnazzio di Castelfranco, Italy. He registered the car in Modena with registration number MO 29583. The fifth of 13 166 MMs built for 1953, 0272 M features unique spider coachwork, though its specific builder remains a mystery. Most historians agree that the body was designed by Aurelio Lampredi and is believed to have been built by Ferrari itself.

The 166 MM’s first event was the 1953 Giro di Sicilia, followed two weeks later by the Mille Miglia wearing race #514. At the helm was Cacciari alongside R.H. Bill Mason, father of the Pink Floyd drummer and noted Ferrari collector Nick Mason. During this time, the car was also used in the production of the 1953 Shell movie about the Mille Miglia, which was directed by Bill Mason. The pair placed 56th overall and 3rd in class, exceptional for such a gruelling event. There, several details on the car were changed, including fitting a full-width windshield and a slightly revised grille amongst other changes. A handful of these features changed again by September 1953, when 0272 M raced at the 1st Gran Primio Supercortemaggiore. Throughout his ownership in the 1953 season, Cacciari entered 10 hill climbs and events in Italy such as Coppa d’Oro Siracusa. Cacciari proved to be a consistent driver, regularly placing within the top 10 at events around Italy and on some occasions was raced multiple weekends in a row.

For 1954, the 166 MM was sold to its second owner, Alberto Luongo of Rome. Prior to Luongo’s purchase in 1953, the 166 MM must have suffered a small racing accident, as the shape of the nose has changed, which is evident in period pictures. It was raced at the 1954 Mille Miglia by Emmanuel de Graffenried and G. Parravicini, bearing #556. While the car was entered in the Mille Miglia under the Scuderia Ferrari name, it was used exclusively by MGM Studios for its movie The Racers, and both de Graffenried and Parravicini drove the car as stuntmen. The star role was played by Kirk Douglas who won the Mille Miglia as ‘Gino Borgesa’, and in the movie the car was identified as ‘Spyder Burano’, not as Ferrari. As a result of filming, 0272 M failed to finish the race. Much of the driving during the actual race was done by John Fitch and Kirk Douglas himself.

Afterwards, 0272 M was exported to California where additional work on The Racers was undertaken. Upon completion, all of the cars used in the film were sold to Tom Carstens of Tacoma, Washington. Carstens sold 0272 M to Pete Lovely, also of Tacoma. At that time, the car was painted white and gold. Lovely continued to race the 166 in 1955 and 1956, later selling it to Pat Piggott, also of Washington. After being shown at the Pebble Beach Concours d’Elegance in 1961, the following year, it moved east to Massachusetts where it was owned by a trio of owners before being acquired by Ferrari enthusiast Ed Niles and moved back west to Los Angeles.

Niles brought the car to the Monterey Historics at Laguna Seca in 1976 where it was driven by Larry Krane and returned once again to Pebble Beach. Over the course of the next several years, the car retuned to Pebble Beach and Monterey frequently, never shying from the Northern California car scene. Passing through the hands of Dane Prenovitz, the car was acquired by collector Ed Davies and shown at the 1993 Cavallino Classic and Ferrari Club of America Annual Meet and National Concours.

After competing and showing in the Ferrari Historic Challenge and the Cavallino Classic in 2000 with Jean Sage, the car was later sold to John Megrue of Connecticut who brought 0272 M back to its native Italy to campaign the Ferrari in the Mille Miglia Storica in 2008, 2009 and 2010. The car was also shown at numerous concours events, including at Le Belle Macchine d’Italia in Pennsylvania in 2011, winning Best of Show, as well as the Amelia Island and Greenwich Concours in 2017.

As confirmed by marque historian Marcel Massini, it retains all of its original mechanical components, including the frame, engine, gearbox, rear axle, steering box and all carburettors, all accounted for on copies of the factory build sheets. The nose has recently been returned to its original configuration as it was in 1953 and the bodywork is said to be 80 percent original. Metallurgic tests have been undertaken at 20 different points on the chassis and welding by a German specialist at a cost of €15.000. His 97-page certificate proves that all steel on the car is correct in age, quality, and dimensions and complies with factory specifications of the frame producer Gilberto Colombo (GILCO). Italian Ferrari historian Andrea Curami called 0272 M in his 2008 Mille Miglia Yearbook ‘one of the most original early racing Ferraris in existence!’

Furthermore, the car received a complete engine rebuild in addition to a number of mechanical upgrades undertaken to increase overall drivability for vintage events. This includes an electronic ignition, upgraded alternator and auxiliary electric cooling fan, and the five-speed gearbox has been updated to be fully synchronized, amongst other modifications. All of these changes are reversible and the car can easily be converted back to original specification.

A 166 MM is truly a joy to drive, reliable, smooth and with plenty of horsepower on tap channelled through its mighty V-12 and five-speed gearbox, it remains highly eligible to events around the world, including not only the Mille Miglia, but also the Grand Prix de Monaco Historique. Eminently usable and with a fascinating history, this would be an exceptional acquisition to show, drive and enjoy at concours or vintage racing events.