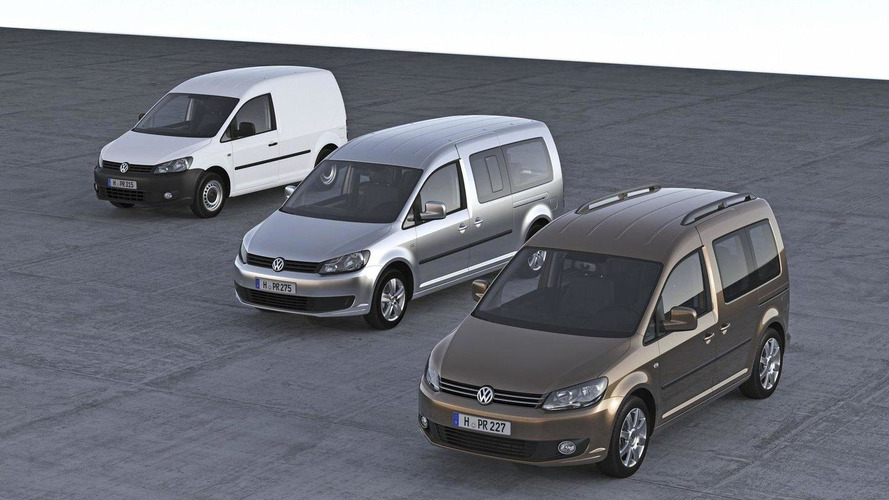 Get the details about the new Volkswagen Caddy compact van, and see the pics, inside.

Volkswagen has unveiled its latest commercial compact van earlier this week.  The new Volkswagen Caddy will be sold with four choices of diesel engines, two of which are BlueMotion units, and two petrol models.

The two BlueMotion TDI engines produce 75 and 102 PS (55 and 75 kW), but more powerful 110 and 140 PS (81 and 103 kW) turbo diesels are also on offer.  Each features common rail direct injection and a particulate filter.  While the 102 PS unit can get a seven-speed DSG and four-wheel drive, the 140 PS version gets hooked up to a remodeled six-speed DSG.  To help keep fuel consumption low, the two BlueMotion units also get start/stop and regenerative braking.

Several models of the van will be sold, including the panel and kombi versions of the Caddy, the Startline, Trendline and Comfortline versions for a more comfortable Caddy, and the Tramper camper van.  All models of the van use a removable second row of seats, a first for the Caddy.  Those buying the Caddy will find 3,030 liters of cargo space, but those needing a larger model can opt for the Caddy Maxi, which uses an extended wheelbase and ups cargo to 3,880 liters.  Each model also gets ESP, daytime running lights and hill assist.

Pricing has been reduced on the new Volkswagen Caddy, with a new retail tag beginning at €13,595 not including taxes.  Those wanting a Startline model can expect to pay a minimum of €14,205.  German sales for the VW Caddy will begin in September, with sales kicking off in other markets soon after.

[UPDATE]  Volkswagen dupped us with their marketing-speak.  This is not a next-generation Caddy as VW would like you to believe, but a major facelift in line with the current VW design paradigm.