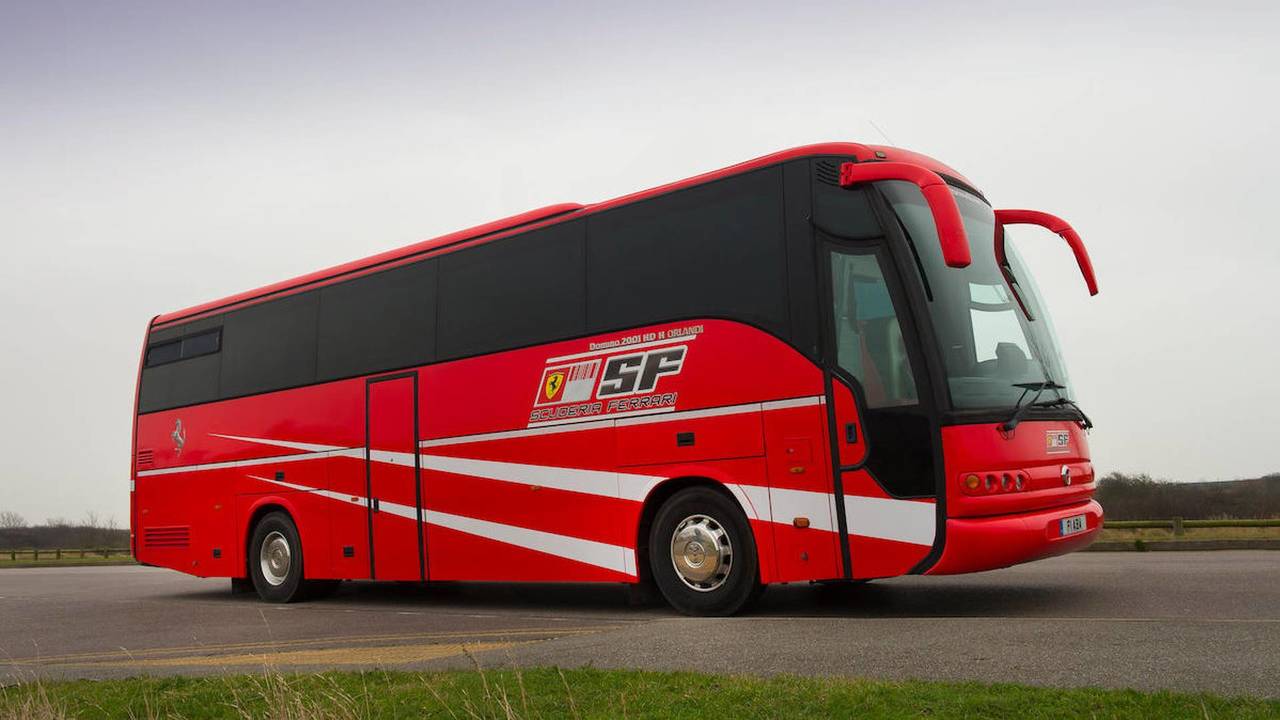 An intimate and unique piece of Ferrari's Formula 1 history.

Remember the time when Ferrari was the dominating force in Formula 1? In the early 2000s, the Scuderia had a great driver lineup and enjoyed the love of fans all around the world. Things have changed drastically in the last couple of years, but an interesting piece of memorabilia (well, kind of) for sale brings us back to the beginning of this century and Ferrari's unprecedented success..

During its Paris auction on February 8, Bonhams will offer the official Iveco Ferrari team bus without reserve, used by the Italian team between 2001 and 2005. And to answer your immediate question – yes, it was used by the seven-time world champion Michael Schumacher and his teammate Rubens Barrichello.

The Iveco was transformed from a standard bus to a custom built luxury motor home, riding on an air suspension and powered by a 380-horsepower (283-kilowatts) diesel engine, mate to an eight-speed automatic ZF gearbox. Originally, the vehicle featured two separate apartments with TV, satellite telephone, internet connection, and physiotherapy table for post-race treatment.

However, the second owner of the bus commissioned a full conversion into the ultimate motor home it is now. The whole electrical system has been replaced and upgraded, and the bus has been equipped with a complete bathroom with ceramic lavatory, independent heating and air-conditioning systems, onboard 220-volt diesel generator, a Bose home theater system, and a Hastens Luxuria double bed.

And to prove this is indeed an original piece of the Prancing Horse's history, the vehicle comes with a Ferrari Certificate of Authenticity signed by the team principal, Stefano Domenicali. Accompanying documentation also includes a UK V5C Registration Certificate, various expired MoT certificates, and different invoices relating to the motor home conversion.

This Iveco Domino Orlandi-bodied motor coach was custom built for Scuderia Ferrari's Formula 1 operations in 2001 and remained in service with them until the end of the 2005 season. This was a period during which Ferrari dominated Formula 1, its lead driver Michael Schumacher securing the last four of his seven World Championships (2001-2004).

Iveco is an Italian manufacturer based in Turin and therefor the obvious choice of transportation for what is, in effect, Italy's national motor racing team. Some 12 metres in length, this Domino Orlandi HDH model rides on air suspension and is powered by a 380 horsepower engine, which drives via a ZF eight-speed automatic transmission.

Ferrari's Iveco motor coach was specifically designed for strategic meetings and interviews between the drivers – Schumacher and Rubens Barrichello – and other team personnel. In its original configuration, the vehicle featured two separate apartments with independent access, each of which was equipped with an LCD television, computer table, satellite telephone, internet connection, enclosed shelving, and wardrobes. In addition, each had its own physiotherapy table for post-race treatment.

The Iveco's next owner commissioned a full conversion into the ultimate luxury motor home. This involved making numerous improvements to the specification, which now includes upgraded electrical and mechanical components, a complete bathroom with ceramic lavatory, independent heating and air-conditioning systems, onboard 220-volt diesel generator, a Bose home theatre system, and a Hastens Luxuria double bed.

The current owner purchased the vehicle in 2009; maintained regardless of cost, it has covered fewer than 90,000 kilometres from new and is described by the vendor as in overall very good condition. Finished in Rosso Corsa with beige leather upholstery, it still displays its distinctive 'Scuderia Ferrari' branding and is surely the ultimate in accommodation for the globetrotting motor sports enthusiast. Accompanying documentation consists of a UK V5C Registration Certificate, sundry expired MoT certificates, various invoices relating to the motor home conversion, and a Ferrari Certificate of Authenticity signed by the Team Principal, Stefano Domenicali. An intimate and unique piece of Ferrari's Formula 1 history dating from a period when the 'Prancing Horse' enjoyed almost unprecedented success.