2019 Volvo V60 Caught Getting A Drink At Gas Station 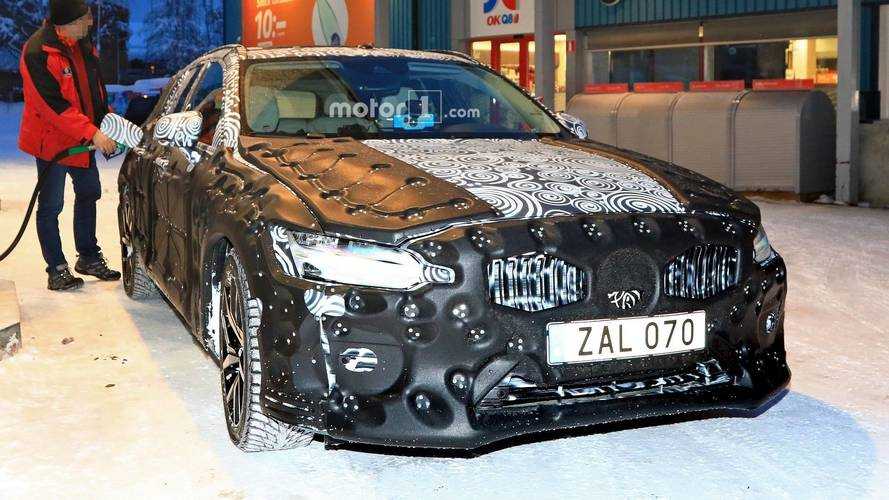 Wagon fans, rejoice. A completely new V60 is in the works.

SUVs like the XC90, XC60, and the first-ever XC40 are hugely important for Volvo, but that doesn’t mean the Geely-owned marque is neglecting its wagons. After the V90 and its rugged Cross Country sibling, the Swedes are about to downsize the winning formula for the completely new V60 caught this week between two test sessions while getting a refill in northern Sweden.

In typical Volvo fashion, the prototype was wearing rather weird camouflage attire with the black and white swirly disguise all over the body combined with plastic add-ons on some of the panels. The extra layer of camouflage kind of looks like Swiss cheese with all those holes in it and gives the V60 an interesting appearance, if not a bit on the odd side.

Keen eyes will notice the test vehicle has a cutout on the front-left fender, which likely means we’re dealing with a plug-in hybrid vehicle as that’s the place where Volvo puts the charging port on its PHEVs. However, you can never be too sure when talking about prototypes. In fact, it might have been a diesel as in some countries a green nozzle usually refers to a diesel pump, though there are some exceptions.

Once the camouflage will drop, expect to see a gorgeous design in the same vein as its bigger brother, the V90. It should be just about the same story on the inside as the cabin is unlikely to stray away too far from Volvo’s recent products. Take for example the XC60 and XC90, which have essentially the same dashboard design, with only the shape of the air vents being different and a few other discreet variations.

Like the XC60 and all the “90” series models, the new V60 will ride on the Scalable Product Architecture (SPA) and will use an assortment of four-cylinder engines. The top-of-the-range version will be the T8 plug-in hybrid marrying a supercharged and turbocharged 2.0-liter gasoline engine with an electric motor to provide a combined output of 400 horsepower and 472 pound-feet (640 Newton-meters) of torque.

When will it debut? Our money is on 2018, but bear in mind Volvo is cutting back on auto shows and will only be attending Detroit (too late for that), Geneva, and the alternating Beijing / Shanghai events. A best-case scenario would be early March in Geneva or the end of April in Beijing. We’re not excluding the possibility of seeing the new V60 at Volvo’s own event later this year as it was the case with the V90 Cross Country back in September 2016.

P.S. Notice the test driver is wearing a “SAAB” jacket and it looks like someone drew a sharp lightning embedded into a circle on the rear window that sort of resembles Opel’s logo.