We Were At The Premiere Of Fast And Furious Live 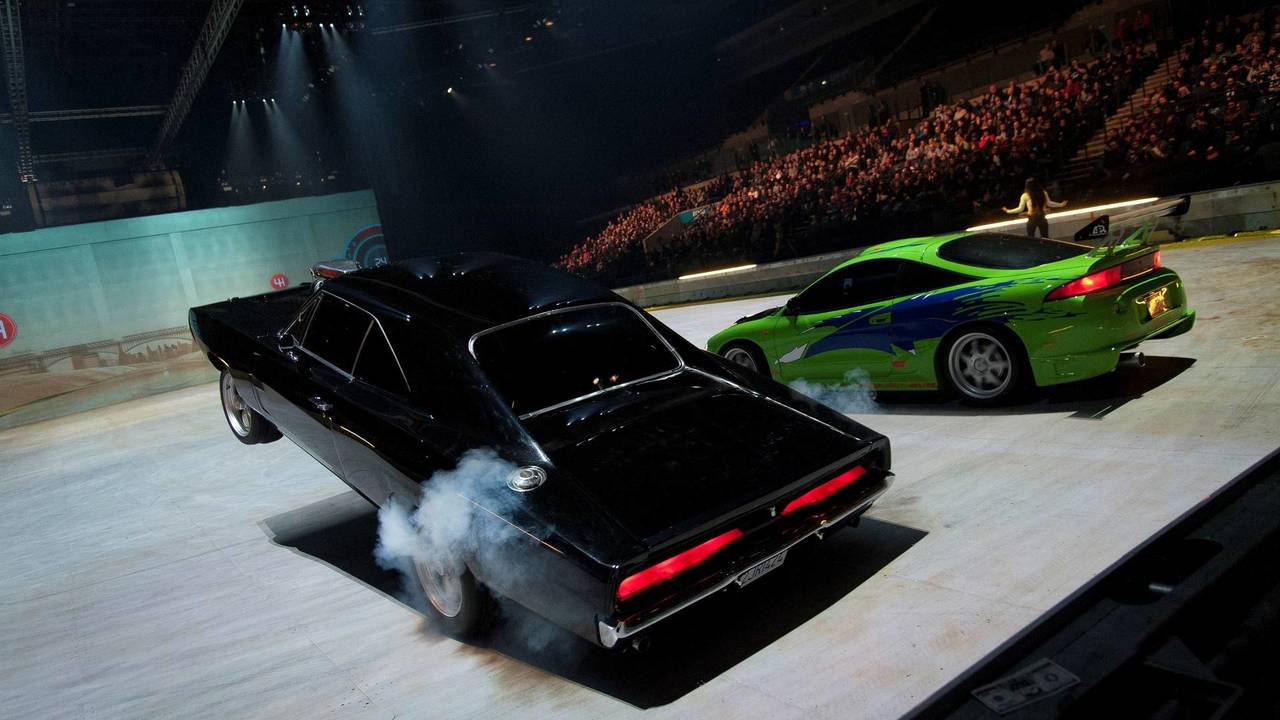 The world's greatest car theater show kicked off in London over the weekend.

Stars gathered at the O2 Arena last Friday night as the Fast and Furious Live world tour kicked off in front of a sell-out crowd. The ground-breaking production, which recreates scenes from the automotive-inspired film series in front of a live audience, has been in the works for over five years.

The show starts with a European leg, which will take in 23 arenas in 14 countries in its first year, before carrying on across the rest of the world with a non-stop five-year tour.

Star and producer from the Fast and Furious films, Vin Diesel, was in attendance at the premiere, and couldn't hide his enthusiasm for the new show.

"Wow, look at this amazing arena," he said before the show. "It's so exciting to be here, so exciting to be able to present this show. Rowland, who directed the show, was a fan with an idea. He was a fan with passion, and he dreamed up this idea that we could have a car theater for all of you, and then you could experience what it was like to make these movies – something that we feel all the time."

Diesel was not lost for words at the premiere.

"I just want to say, on behalf of the Fast and Furious saga, we're so excited that you're all here to launch this, and I will say on behalf of my brother Pablo, thank you for being a part of our family," he added, referencing the late Paul Walker, who also stared in the films and competed in motorsport events professionally. Walker makes a posthumous appearance in the show thanks to archive footage.

A stunt team of 11 drivers and a handful of parkour experts make up the majority of the show's cast, recreating 18 famous scenes from the franchise that have been interwoven with an all-new story line featuring fresh characters – street racer Sophia Diaz, played by Elysia Wren, and DSS Agent Dawson, played by Mark Ebulé – both joining forces to hunt down a remnant of Cipher’s crew from the most recent film, 2017's Fate of the Furious.

Diaz and Dawson take the audience on a globetrotting adventure that is made possible thanks to high-tech 3D mapping, which transforms the entire arena into any location imaginable – from the streets of Miami to the ice lakes of Russia – by projecting ultra-realistic sets and images onto the show's custom-built backdrop and arena floor. It all works in tandem with a 'cast' of over 40 vehicles to create a visual experience that has to be seen to be believed.

"We're excited, we finally get open up the Fast and Furious Live show," said stunt driver Chris Morena. "It's awesome – just the way the advertising has been to tell you the truth, when you see the merch van it opens your eyes to what we've been doing for four months. I'm taken aback by how it's been, every week we see more, they tell us more. But fourth months ago I didn't know how extreme it would be, just because it was 11 of us, plus our scriptwriters and our choreographers so it was a small group. Then as it grew it was just more immense, now the world tour, it opens your eyes to how big it is. It's exciting to show people what we've got. Now it's time to shine and have everyone doing their thing."

Rowland French, who wrote, directed, and produced the show was previously at the helm of the Top Gear Live world tour – which concluded at the O2 in 2015 under the 'Clarkson, Hammond and May' banner. He admits that his new production came with its own unique pressures.

"It's so different because Fast and Furious Live has been a labor of love for me; I feel a lot more ownership of it," he told Motor1.com in an interview. "I think Clarkson, Hammond, and May – it's about them, it's their show and I was the facilitator of it. Whereas with Fast and Furious Live, it feels so much more my own. I feel more on the line than ever."

Having previous experience in such a show certainly helps, but the time spent on both hasn't seemed to dampen French's enthusiasm one bit.

"I'm excited," he added. "I think a show like this – there's so much interactivity in Fast and Furious Live – it needs its crowd, it needs an audience, it needs the fans; so in many respects all these months of rehearsing in a big black box hasn't really given us the true reading of it. We've been missing our 'third actor' so tonight is a big night for me. I'm finally going to see it soon and I couldn't be more excited."

Before the show, French and Diesel attended a red carpet event with the entire cast and crew. Some famous Fast and Furious fans also attended, among which included James May, Nicola Roberts, Adrian Newey, Karen Clifton, Tom Kerridge, and more.

"I'm not a big petrolhead funnily enough, I drive a VW Touareg that I lease – a proper family car, it stinks of sick at the moment," EastEnders actor Shane Ritchie told Motor1.com. 'But I'm a fan of the [Fast and Furious] movies and the franchise and the kids are as well so we're looking forward to seeing that come to life."

Another local star in attendance was ex-Tottenham player Jamie O'Hara, who is also a huge petrolhead.

"I've been a massive fan of all the movies they've done, so I'm interested," O'Hara said. "I can't believe how big it is, it's a massive event. I am a massive car fan, I've been lucky enough to own some nice cars. I'm more into the classy cars, but I wouldn't mind driving around in one of them."

Magician Dynamo has been close to the production since its early days, visiting rehearsals on a number of occasions.

"I think it's absolutely epic," he said. "I saw some of the rehearsals, I saw what they were planning to do, and me as a guy who's done a lot of creative things in my time, I didn't think it was possible."

Finally, The Stig from BBC's Top Gear was also in attendance, and he seemed impressed with the show when we caught up with him.