The company thinks the coupe could reach a 249-mph top speed.

Until recent auctions brought them back to the spotlight, the Bugatti EB 110 was a nearly forgotten supercar of the 1990s. Now, Casil Motors has created a semi-revival with its SP-110 Edonis Fenice by putting a new body and upgraded mechanicals on top of some of the EB 110's remaining carbon fiber monocoques. The firm will limit production to just 15 units.

The SP-110 Edonis Fenice has complicated history. When Bugatti went bankrupt in the 1990s, employees formed B Engineering and bought 17 remaining EB 110 carbon fiber monocoques. The team wanted to create their own supercar called the Edonis, but the project never quite came together. Casil Motors took over the endeavor in 2017, around 20 years after B Engineering initially showed the Edonis. 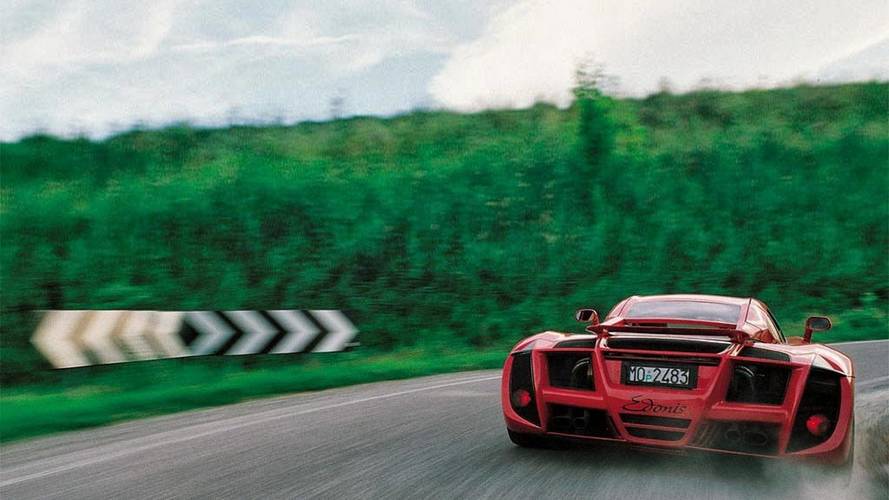 The new supercar's design could easily be polarizing. Where the EB 110 is fairly angular, the SP-110 adopts a curvy body. The headlights appear to sit high on the fenders with prominent vents right behind them. An asymmetrical inlet in the front is an especially odd touch. At the rear, the supercar features gargantuan opening in the bodywork. While the styling might not to be everyone's taste, significant work must go into creating the hand-beaten aluminum panels. The vehicle weighs just 3,086 pounds (1,400 kilograms).

Casil Motors reports that everything is ready to begin producing the SP-110, and it intends to start building them soon.

My name is Antonio Calva owner and CEO of Casil Motors. and I’m reaching out to you today regarding the return of the Edonis supercar that was originally built by B Engineering.

Below I will provide some information about us, and the Edonis.

Casil Motors is a Las Vegas-based automotive company, previously known as PSC Motors and the creators of the 2015 SP-200 SIN Concept (pictures below).

Casil Motors, alongside B Engineering are creating the ultimate enthusiast driven supercar, uninterrupted by modern electronic aids and built from the ashes of Bugatti.

B Engineering is the exclusive service provider for the Bugatti EB110’s and EB112’s. Made up of several former employee’s from Bugatti while it was still under the direction of Romano Artioli, B Engineering posses the direct knowledge and craftsmanship that made Bugatti one of the leading Automotive companies in the world.

Casil Motors is a Las Vegas-based automotive company, previously known as PSC Motors. We have worked with small companies, and design teams over the past few years providing consulting and bringing partners together to further strengthen bonds, and nurture the projects that they may be a part of.

When Bugatti Automobili went bankrupt in the mid 90's, several employees got together, pooled their money, and bought 17 carbon fiber tubs from the EB110 production. Their new company would be called "B Engineering" (B for Bugatti) Their mission was to create their own supecar, the “Edonis”.

The Edonis was built by B Engineering, a team of engineers who were left with nothing when Bugatti went bankrupt in the late 90's. This organization of dedicated, and passionate team members set out to create something entirely different. Something that they truly envisioned when working on the EB110 less than a decade earlier. The Edonis has the honor of being called the first car of the 21st century as it was unveiled at midnight January 1st, 2001. The company went on hiatus shortly after, until late 2017 when Casil Motors acquired the Edonis project. After almost two decades of the original unveiling of the Edonis, we're finally offering the car to the public with a limited production run of just 15 units.

The Edonis is a true Italian thoroughbred. Twelve cylinders, Over 700 Horsepower, Rear wheel drive, and a six speed manual transmission if that doesn’t scream Italian supercar nothing will.

The Edonis’s project director Nicola Materazzi, has a true supercar pioneer Resume, He was the main contractor for the likes of Bugatti, and then from 1990, He worked for Ferrari as lead engineer for projects such as the 288 GTO Evoluzione and the F40. He was also top dog at Ferrari’s F1 research and design division  as well as being credited as being the father of the Lancia Stratos.

The Edonis shares the EB110's tub and chassis, slightly modified, and the basic architecture of its engine, but there’s where the two cars diverge. The Edonis is a classic Modenese supercar, with a striking body fashioned from hand-beaten aluminium, rear-drive only and a phenomenally potent, 3.8-litre, twin-turbo development of the Bugatti V12. It's an altogether rawer take on the supercar theme, possibly the most raw there has ever been...

The Edonis has been created by a handful of ex-Bugatti staff, headed up by Jean-Marc Borel, the man who was the president of Bugatti Holdings International. The small, talented and patient group of men who formed B Engineering after the collapse of Bugatti seem to have created the EB110's alter ego, as if to show what fire, passion and potential there was inside both the EB110 and Bugatti, of which they remain very proud of.

With rear-drive and a 1400kg kerb weight, the Edonis gives a hint of what the Bugatti might have been had it been developed in traditional Modenese fashion - apart from the carbon tub and outrageously powerful 3.8-litre evolution of the EB110 V12.

B Engineering's calling card, is a demonstration of the skills that Modena still has to offer, including very fine, hand-beaten aluminium bodywork. In 2002 the Edonis managed almost 360kmh (223mph) at Nardo. With its latest engine - which runs a massive 2.5bar of boost - with longer gearing, the magic 400kmh (249mph) doesn't look unattainable. That's why the Edonis is fitted with the same 'Pax' tyres that Michelin developed for the VAG Bugatti Veyron. The Edonis shows what the EB110 might have been if the company continued its evolution.

We are in the final stages of development. As vehicles get more and more advanced, we believe that the market for an analog classic high performance supercar would be a perfect vehicle for the true automotive enthusiast. We want to bring modern reliability and classic driving pleasure together for the upcoming production run of the Edonis.

We have everything ready for production, and will begin very soon. The technical prototype is in Campogalliano, Italy which is within sight of the original Bugatti factory that built the EB110's.

The great cross-roads of history are rich in symbols; because of this they often have the power to move man's imagination. They are therefore conducive to the emergence of projects which are themselves rich in symbolic meaning. Amongst all human endeavours of a technological nature, the development of the automobile has probably had the biggest impact on the 20th century. For many, the car is still an endless source of sheer passion and wonder. To celebrate the passage of the car into the 3rd millenium through an invitation into the realm of dream and pleasure: such is the vision of the Edonis project.