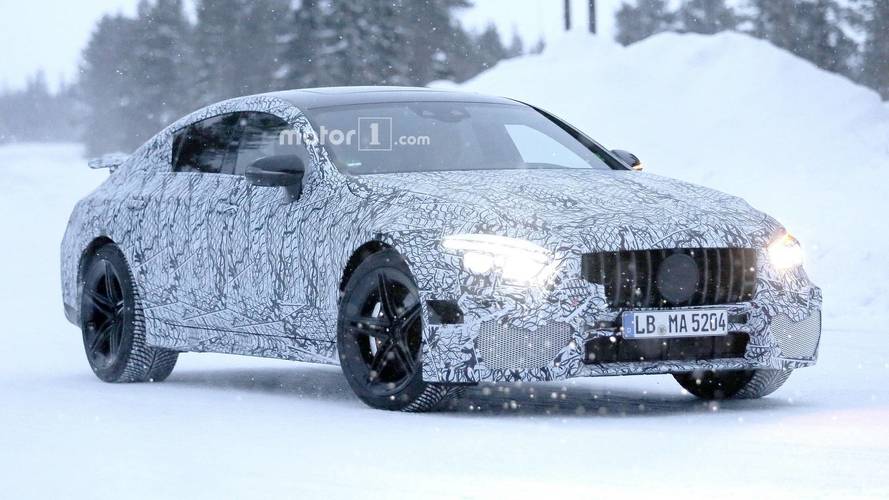 If you’re finding the recently unveiled Mercedes-AMG CLS 53 to be a bit on the bland side, you’re going to have to wait for the more exciting four-door GT Sedan set to fill in the void left after the CLS 63’s demise. Spotted performing the final testing rounds on snowy roads, the Porsche Panamera rival appeared to have all the production bits in place. These include the menacing Panamericana grille up front and the rear spoiler at the back where we can also notice the quad exhaust.

Speaking of which, the shape and appearance of the four tips is identical to what the “63” models have, so logic tells us the prototype was rocking a biturbo 4.0-liter V8 engine. In the new application, it will probably at least match the Mercedes-AMG E63, which in the “S” specification is good for a monstrous 603 horsepower.

A spy video from earlier this month showed another prototype also with a quad exhaust system, but that one had round tips in the same vein as those seen on the new “53” models. However, that doesn’t necessarily mean it had the same powertrain as the CLS 53, which combines a turbocharged straight-six 3.0-liter engine with an electric motor to deliver a combined 429 hp.

Previewed by Mercedes last year through the AMG GT concept illustrated above, the new member of the Affalterbach family will debut in less than two months at the 2018 Geneva Motor Show. Those in the market for a fast sedan with as much power as possible will have to patiently wait for the concept’s powertrain to trickle down to the production model. It should happen later in the model’s life cycle and rumor has it the combined output will match that of the showcar: a gargantuan 805 hp. That would represent a massive hike compared to the 680 hybrid punch provided by the Porsche Panamera Turbo S E-Hybrid.

No word on pricing just yet, but naturally the four-door AMG GT will be significantly more expensive than the CLS. Now, if only they’d make a wagon…