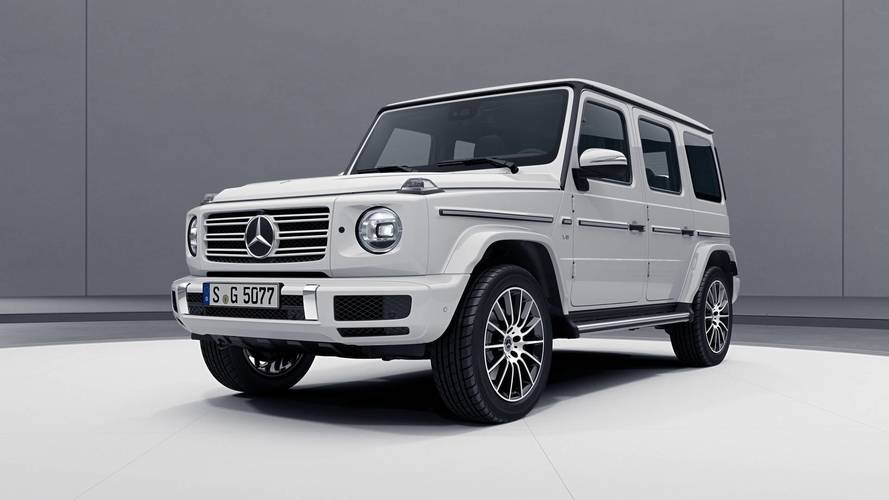 Think of it as a taste of things to come as far as the new G63.

If you’re like us, it means you can’t get enough of the new Mercedes G-Class. We’ve seen the regular model under the glamorous spotlight of the 2018 Detroit Auto Show and also in official images depicting the stealthy G fitted with the optional Night Package. Fast forward to present day, the boxy off-roader is back for the AMG Line specification bringing a slightly sportier exterior.

Giving us an insight into what to expect from the full-blown G63, the AMG-ified G features mildly updated front and rear fascias and rides on one of the two 20-inch alloy wheels choices carrying Affalterbach’s signature. Also noticeable are the slightly beefier wheel arches at both front and rear axles, along with multiple brushed aluminum exterior accents, and “Mercedes-Benz” lettering on the front brake calipers.

Rounding off the changes on the outside is the sports exhaust system making the most out of the soundtrack coming from the biturbo 4.0-liter V8 inside the G500 where it pumps out 422 horsepower (310 kilowatts) and 610 Newton-meters (450 pound-feet) of torque.

Once you virtually hop inside the revamped cabin, the 2019 G-Class AMG Line will greet you with a flat-bottomed steering wheel clad in Nappa leather and configured with a three-spoke design. To spice things up, Mercedes will also throw in AMG-branded floor mats and red accents for the leather upholstery as well as the seatbelts.

If you’re more interested in upgrades underneath the hood, you won’t have to wait too long as Mercedes R&D boss Ola Källenius has revealed the G63 will be out sooner rather than later. Even the regular G-Class benefits from AMG’s knowhow as the suspension (including the front double wishbone setup), axles, shaft, drivetrain, and the knuckles have all been developed by Mercedes’ performance division.

The G65’s future seems uncertain at this point as the V12 is expected to survive only in Maybach models. That being said, there could still (theoretically) be a G-Class with a mighty biturbo 6.0-liter engine considering the previous generation did spawn a bonkers G650 Landaulet branded as a Mercedes-Maybach model.