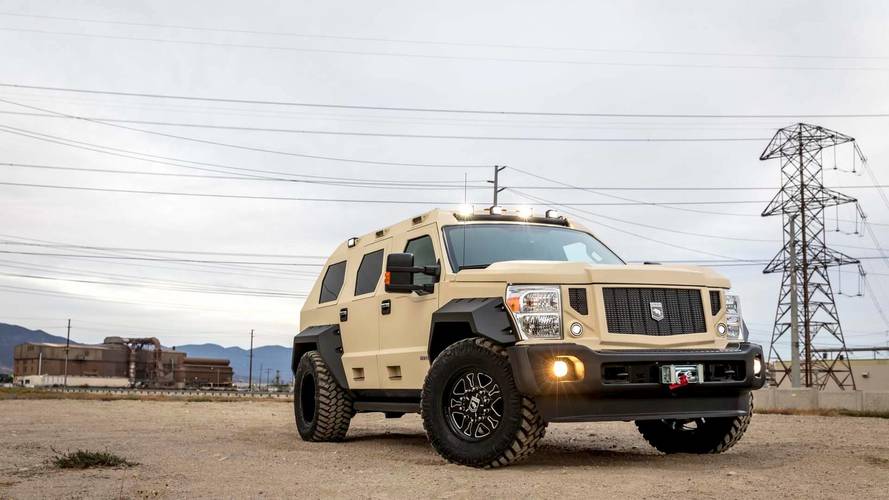 It may look tough, but there are leather seats and a 40-inch TV inside.

Observing the incredibly imposing Rhino GX SUV from the outside, one would expect the cabin to consist of military-spec seats with razor-thin padding, lots of olive-drab metal, enough surveillance gear to monitor the rovers on Mars, and mounting points for Gatling cannons.  And why not? It measures almost 19 feet in length while standing over seven feet tall; it’s eight feet wide, and it weighs five tons. Combine that with special-forces-type color options like Stealth Black, Tactical Green, or Desert Sand, and bystanders have every reason to duck-and-cover when they see a Rhino rolling their way.

Invade your neighborhood with these rides:

Roshel Senator APC Is An Armored SUV Ready For Any Apocalypse

In reality, this extraordinarily macho machine – which anyone can buy from niche automaker US Specialty Vehicles – is actually a major softie on the inside. That holds especially true for this new Executive edition, which takes the already luxurious leather-trimmed innards of the Rhino and adds exotic wood trim with chrome accents. Power seats get heat controls and power foot rests, and a massive sunroof lets in light from above.

There’s also the 40-inch television that is part of a new entertainment system which, among other things includes a KVH TRAC Vision A9 Satellite Receiver. That at least sounds like something you’d find in a SEAL-approved urban assault vehicle, but we suspect it’s used for catching the latest episodes of Agents of S.H.I.E.L.D. as opposed to actually being a secret agent. However, since rear passengers are separated from front-seat occupants, the use of cool code names when communicating via the on-board intercom is strongly encouraged.

To make all this equipment work, USSV bolts an extra alternator to a standard-issue Ford engine under the hood. Since the Rhino is based on a medium-duty Ford F-450, power comes from either a 6.7-liter V8 diesel or a 6.8-liter V10. Brakes and suspension components are swapped out for upgrades bits, which helps the massive marauder handle on- and off-road duties while coping with all the added weight.

USSV doesn’t mention the price of this new GX Executive edition, though when the standard model was featured on Jay Leno’s Garage last year a figure of $249,000 was tossed around. With all the extras in this version, it’s probably safe to say that number will be just a tad higher.

As the all-American manufacturer of one of the largest luxury SUVs available on the market, US Specialty Vehicles embraces the power, design and comfort of their Rhino GX Executive Model. With a tough, yet seductive appearance, off-road capabilities and superb power to weight ratio the Rhino GX Executive Model is made for a luxurious owner. Built on a Ford Super Duty Chassis, the vehicle will take you from the wilderness to the boardroom in style.