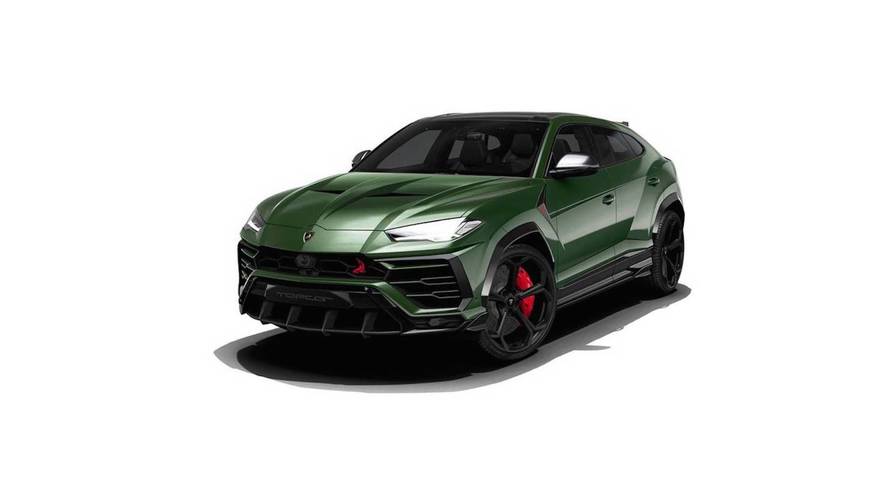 Whether you love the Urus or hate the idea of a Lamborghini SUV in general, there’s no denying that the new Super SUV is quite unique. The sharp exterior styling pairs with a posh interior, and a 650-horsepower (484-kilowatt) V8 – but one tuner thinks that the Urus could be even sharper.

TopCar, Russian tuners previously responsible for builds like this Porsche 911 Turbo S, and this eye-searing Cayenne SUV – has turned its sights on the Urus. Drenching the Lambo in a dark green finish, the shop has digitally made over the SUV with a new fascia, new vents, and plenty of added sporty elements.

This is the first aftermarket kit we’ve seen for the Urus so far, and it does a good job of accenting the already edgy exterior. The SUV maintains its already angular features on the exterior, but adds on new features like a sharp new hood, slightly wider front fenders, and the TopCar logo placed prominently in the left-hand portion of the grille.

A larger, more distinctive vent is located just behind the front wheel well, and new side skirts give the Urus even more edges. Out back, the shop has updated the SUV with a larger diffuser, complete with four vertical slats, new taillights, and the choice of either quad exhaust tips with red accents, or dual exhaust tips with similar styling.

Apart from the images posted in its Facebook page, the shop doesn’t go into detail as to what we should expect when the package comes out in full. We assume an engine upgrade will also be part of the package, but until then, the Urus comes with its standard 4.0-liter biturbo V8 producing 650 hp.