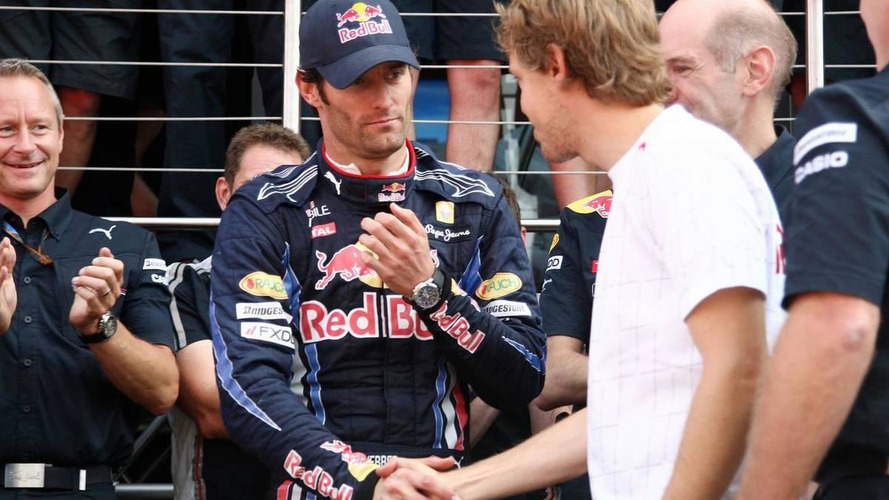 Even though photographers captured Australian Webber, 33, unable to smile as he sternly shook his teammate Sebastian Vettel's hand at Silverstone, Horner said the team then decamped to his nearby house in Oxfordshire on Sunday evening for a night of singi

Amid reports of civil war within Red Bull, boss Christian Horner phoned British newspaper reporters on Monday with a tale of team harmony.

Even though photographers captured Australian Webber, 33, unable to smile as he sternly shook his teammate Sebastian Vettel's hand at Silverstone, Horner said the team then decamped to his nearby house in Oxfordshire on Sunday evening for a night of singing.

Mere hours after Niki Lauda described the atmosphere at Red Bull as "poisonous", Briton Horner insisted that, with both the drivers on stage alongside himself and Adrian Newey, they sang a karaoke version of the 70s classic American Pie.

But while Webber had flagged a round of "decent chats" with Horner for Monday, the team principal said he will not sit down with the British grand prix winner until later this week.

Allaying the suspicion of bias within the media, though, Horner insisted points leader Webber is not the number two driver.

"If there were a recurrence at the next race then the component would go to Mark's car on the same basis, of championship position," he confirmed.

Horner admitted it was a mistake to remove the new front wing from Webber's car without first explaining "the rationale" to the driver.

"There is no desire because of Sebastian's nationality, age or looks to give preference to one car or the other," he added.

BBC commentator Martin Brundle said after Silverstone that he feels "uncomfortable for Horner" because he suspects he is receiving orders from the team's German-speaking owners.

Horner insisted: "Never, at any point, has pressure been placed on me to favour Sebastian because it's better for selling cans of Red Bull.

"I didn't have a conversation with Helmut (Marko) or anyone from Red Bull regarding the decision to give Sebastian the wing. It was purely a technical decision, which I discussed with Adrian."

He also slammed reports that Webber's mechanics taunted Vettel's side of the garage by waving the old front wing at them as the team packed up the garage.

"It's ridiculous," he said. "Our mechanics are completely for each other, irrelevant of the car crew.

"I believe this is behind us. If there was any ill-feeling, it is resolved and we move on as a team which has won five races, more than anyone else, this season," he said.

American Pie or not, the Red Bull saga is music to the ears of the team's main championship rivals at McLaren.

"People take the mick out of how well Lewis and I get on but it works well with our team and it means the guys back in the factory are not worrying about us and how we are with each other," said Jenson Button.

"They can focus on making our car quicker," he added.

Lewis Hamilton seems to have taken Webber's side, commenting on the wing scenario: "If that was me? ... Jeez.

"It's not nice and I'm very, very, very happy for Mark. But it seems that we have more harmony in our team and that's why we're leading both championships."