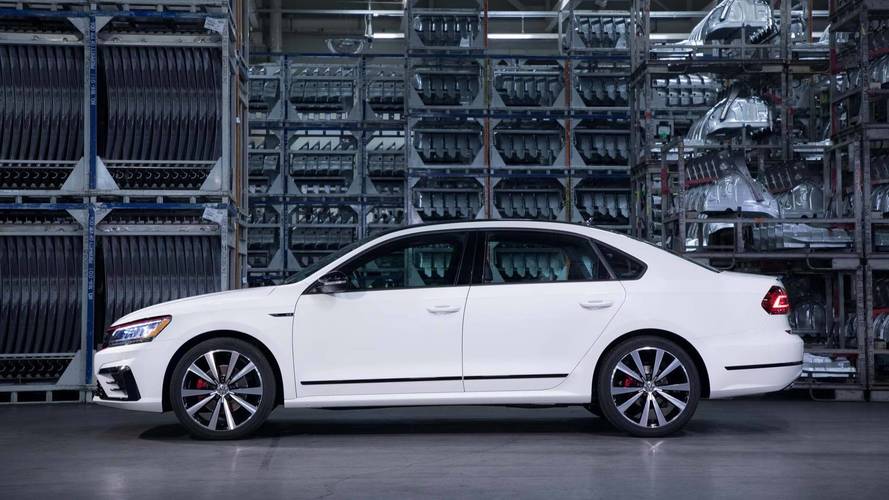 The sedan will be followed by new MQB-based SUV models.

Volkswagen has the sporty Passat GT on display in Detroit, during the North American International Auto Show, which is scheduled to go on sale in the second quarter of this year. Apparently, it will have a very short life cycle, as the German automaker is also announcing a completely new Passat for the United States is coming next year.

During its official press conference in the Motor City, Volkswagen has briefly confirmed it is working on a new generation of the model especially for the U.S. market, but no more details were given. We expect the sedan to finally receive the company’s MQB platform and to get most, if not all, of the technological innovations seen in the new Jetta and the Euro-spec Passat.

The 2019 Passat is part of the automaker’s major Transform 2025+ strategy, which includes more than 50 vehicles currently in development and more than ten new models arriving globally every year until 2020. For the American market alone, VW plans to launch at least two new models each year.

Following the new Jetta premiere, the Arteon will be the next to join the marque’s U.S. lineup later this year. 2019 will be the year of the new Passat, which will be followed by additional MQB-based SUVs shortly after. Interestingly, VW might also bring its Amarok pickup to the States, as a recent trademark filing is suggesting. The truck could serve as a good rival to the just revealed Ford Ranger.

After the Detroit Auto Show, Volkswagen will be busy preparing the new Touareg for its global premiere, set for the upcoming Auto China show in Beijing in April. The new SUV is already on the production lines at Volkswagen’s Bratislava, Slovakia facility, and is expected to go on sale globally before the end of this year.

The Volkswagen brand continues to vigorously pursue its regional consolidation strategy in North America: Today Volkswagen launched the seventh generation of its most successful high-volume model in the region when the new Jetta celebrated its world premiere on the eve of the North American International Auto Show in Detroit. The Jetta is tailored precisely to the needs of customers in North America.

"Together with Golf, Passat and Beetle, the Jetta is one of our most popular Volkswagens – and the Number One Volkswagen in the U.S. We have re-engineered it  100 percent, taking it to a new level. And it is one of the keys to our future success in the United States. By 2020, we will offer at least two new U.S. models annually, covering key segments in the United States," said Dr. Herbert Diess, Volkswagen Brand CEO.

With the preview of the Jetta, Volkswagen will build on the success achieved in North America in 2017. The region contributed to the overall delivery record of the Volkswagen brand with around 592,000 units sold (+1.9 percent, 580,600 vehicles in 2016). As disclosed by the brand ahead of the motor show in Detroit, 6.23 million Volkswagen passenger cars were delivered to customers in 2017, 250,000 vehicles more than in the previous year.

According to Hinrich Woebcken, CEO Volkswagen North America: "We made significant progress towards the comeback of the Volkswagen brand in the U.S. in 2017. The Atlas, our new mid-size SUV, is attracting significant interest among customers. While the market declined in general, we were able to increase our sales and gain market share." In addition, Volkswagen made considerable progress in dealing with the diesel issue. More than 80 percent of the 540,000 vehicles affected in the U.S. have already been retrofitted or bought back.

Volkswagen is going on the offensive in the region with the new models tailored to the American market. The aim is to become a key volume supplier in North America. With this in mind, the company will invest more than 3.3 billion US dollars (2.8 billion euros) overall in North America over the next three years. Some 1.2 billion US dollars (1 billion euros) of this will go toward projects in the U.S. The aim is for the Volkswagen brand to achieve a break-even in terms of operating profits in North America by 2020.

The new Jetta is a key element of Volkswagen's brand campaign in North America. In addition to the Chattanooga-built Atlas, the all new long-wheelbase Tiguan and refreshed, longer range e-Golf2 were also launched in the market. The plan is to launch at least two new models each year in the U.S. market going forward. Apart from the new Jetta, the Arteon will be launched in America this year, with the new Passat to follow in 2019. Additional SUV models, based on the MQB architecture will follow.

The first of a new family of full battery electric vehicles will be added starting in 2020 and will be based on the newly developed modular electric drive matrix (MEB). The first MEB model to go on sale in America will be an SUV.

Volkswagen launched the largest model offensive in the history of the brand as part of the "TRANSFORM 2025+" strategy. More than 50 vehicles are currently in development. Volkswagen intends to bring more than ten new models and derivate to market globally every year until 2020 and thus further expand its position as a leading volume manufacturer.