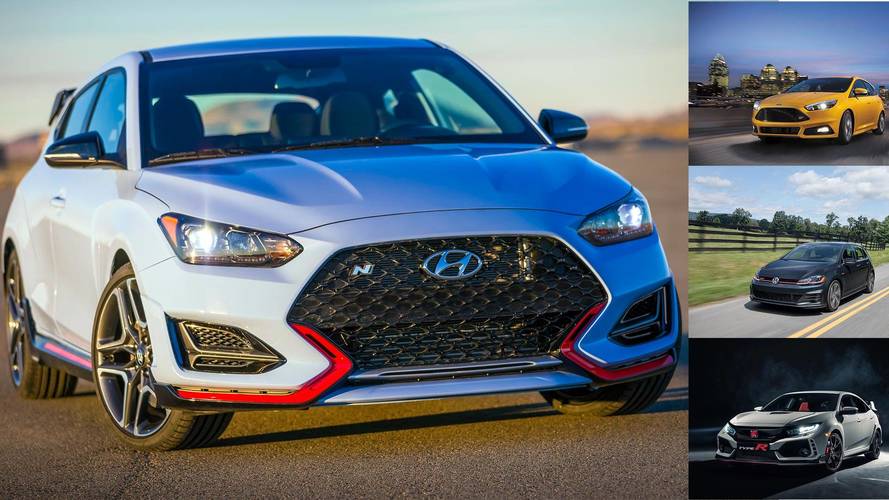 The numbers suggest the Veloster N might be something special.

Hyundai surprised the 2018 North American International Auto Show by launching the Veloster N hot hatch there without any prior teasing of the model's debut. The vehicle marks the introduction of Hyundai's N performance brand in the United States and gives the brand a truly steamy hot hatch. The Veloster N doesn't go on sale until the fourth quarter of 2018, but in the meantime, let's see how its specs compare to other front-wheel-drive hot hatches available in the United States – The Ford Focus ST, Volkswagen GTI, Honda Civic Type R, and Mini Hardtop 2 Door John Cooper Works.

While we don't yet know its price, the Veloster N's specs are very competitive in the segment. Among the front-wheel-drive challengers, the 275-horsepower rating only loses out to the Honda Civic Type R. Like the CTR, the Veloster's six-speed manual boasts automatic rev matching, so drivers unable to heel-toe shift don't have to feel embarrassed at track days. To handle the extra punishment from enthusiastic drivers, the Hyundai's gearbox features upgraded synchronizers and a stronger, double-layer facing clutch.

As horsepower increases on a front-wheel drive performance car, torque steer becomes a bigger concern. The Veloster N handles this problem with what Hyundai calls a Power Sense axle. The firm claims that the design offers "more precise steering, quicker response, and a direct on-center feel." The limited-slip differential should be a big help, too.

There's a lot more to a performance car than just the engine output, but the numbers indicate that Hyundai is in the right track. Plus, there's an impressive team behind the project. Albert Biermann is the former boss of the BMW M division and now leads Hyundai's N crew. He was also a development leader on the Kia Stinger, which turned out fantastic. Now, he has taken on the challenge of doing a hot hatch.