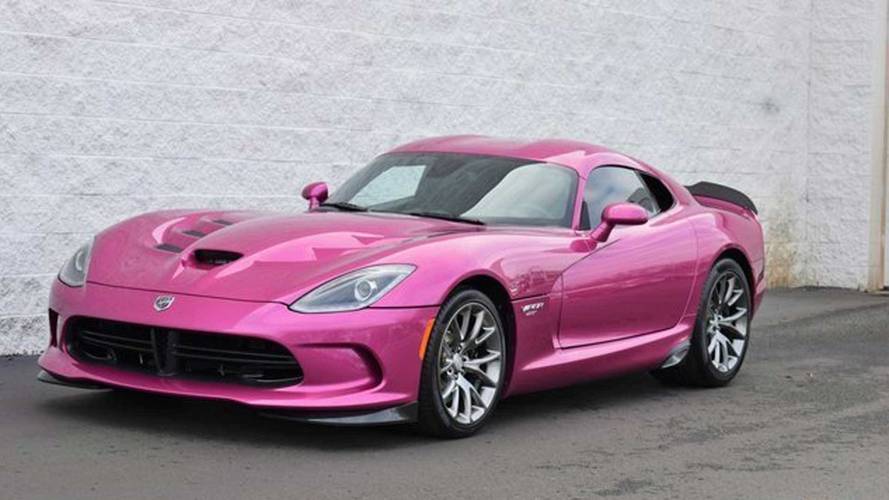 The very rare finish appeared on just two cars in 2017.

If you’ve thought about buying a Dodge Viper but were concerned that you wouldn’t get noticed, have we got a car for you. Actually, Gerry Wood Dodge in Salisbury North Carolina has it, and if that name sounds sort-of familiar in the Viper world, it should. This is the same dealer that bought nearly all the final Vipers back in 2016, which included this particular car that was part of the Advanced Aero Solid Edition. That’s fancy-speak for a series of Vipers that had aero kits and custom colors, and well, this is certainly custom.

According to the dealer description, the Dodge-internal designation for this shade was simply P99 Custom Color. In the real world, we can only call it metallic pink, and it’s certainly striking. This particular car is reportedly one of only two built in this shade, and it was originally sold by this very dealer when new. For reasons not mentioned it came back to the dealership, with the previous owner having accumulated 2,162 miles during that brief period of ownership.

We’d expect such a car to still look like new, and the collection of photos seem to support that. The description from the dealership says the car is “immaculate” and, though only having just over 2,000 miles, it’s gone through a fresh service.

The asking price is $155,800, which is certainly a lot of coin but it doesn’t seem out of line for a special edition snake like this. The big question is whether or not the color helps or hurts the cause, and if we’re honest, we can easily see both sides of the spectrum on this. Are there Viper enthusiasts willing to shell out big bucks for one of two cars wearing factory pink paint? Probably, but we suspect there are also buyers who wouldn't touch it even if it was a one-of-one color. May the best group win.