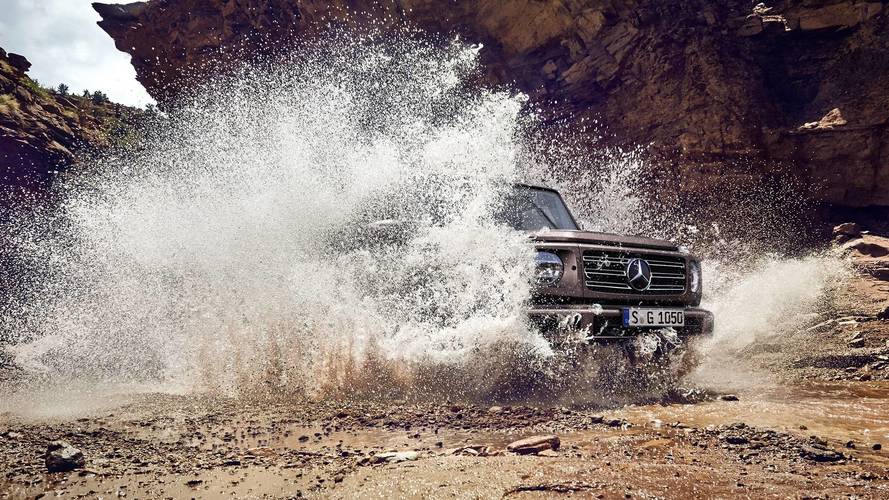 It's big, it's boxy, and it's coming to Detroit.

That’s right, Mercedes-Benz has released another teaser for its upcoming new G-Class… even though we’ve already seen the all-new SUV in its entirety. Nonetheless, the latest teaser gives us an even idea as to exactly what we should expect in terms of capability when the new and improved G makes its official debut.

Pictured here splashing through a muddy canyon, the front end of the new G-Class is easily distinguishable. The massive Mercedes badge, located front and center, is accented by three vertical slats in the grille, rounded headlights, and a more sculpted bumper. This is the second, and hopefully last teaser that Mercedes-Benz will drop prior to its debut, following images of the SUV blasting through a sand dune earlier in the week.

Apart from a boxy new exterior styling, we know that the G-Class will be all new on the inside, too. A fully digital instrument cluster and a pronounced central touchscreen help bring the iconic SUV more into the modern age. Even the hardware has been updated, its off-road prowess coming from the three differential locks with low range gearing, as expected.

We should expect to see a new range of engines under the hood, but we’ll have to wait for an official debut in Detroit to find out exactly what will power this beast. The same ladder frame suspension remains, but it’s been significantly tweaked to provide a better ride while still being a proper, robust off-roader.

Even with all the leaks, Mercedes is staying the course for the debut of its new G-Class at the North American International Auto Show in Detroit. The new Benz will be shown in its entirety in just a few days when doors open to the Cobo Center.