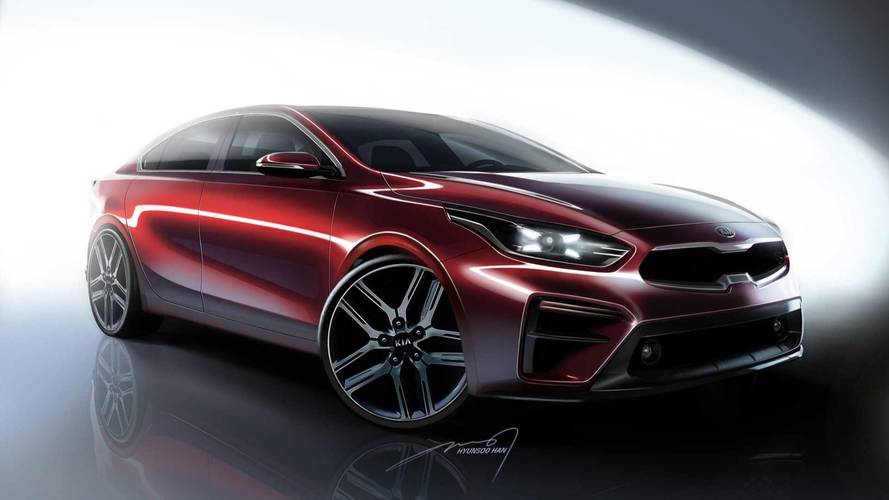 The Stinger-inspired compact sedan will be revealed on January 15.

Kia is poised to unveil an updated version of its compact Forte sedan in Detroit at the North American International Auto Show. To whet our appetites, the automaker has release some teaser renderings of what the new car will look like inside and out. As is often the case with such renderings, body lines are likely a bit exaggerated but the overall look is something of an upscale, fastback recast for the sedan.

In fact, Kia says as much in a release announcing the renders, calling the Forte’s new look “more sophisticated” while holding onto a sporty image that is inspired by the Stinger sport sedan. We can certainly see shades of Stinger in the Forte’s sweeping rear, which appears to be a bit wider and a tad more muscular. A redesigned rear bumper now houses turn signals and reverse lamps separate of refreshed tail lamps, which are now connected with a horizontal strip similar to the Sportage.

Changes up front include bolder creases to the hood, which intersects with a mildly redesigned front fascia that now separates the headlights from the grille. The headlights themselves are redesigned, while Kia calls the Forte’s grille a “fresh approach” to the automaker’s signature tiger nose look. We aren’t entirely sure what that means, but we are sure of the redesigned lower valence flanked with broad intakes and running lamps.

The refresh continues inside with revamped dash that moves the infotainment screen above new horizontal vents, with turbine style vents similar to the Stinger found at the corners. Kia calls the new look a horizontal theme that “creates a sense of openness” and delivers more of a minimalist feel to driver and passengers.

Kia will officially unveil the 2019 Forte and give full disclosure on all its updates January 15, prior to its first public appearance at the Detroit Auto Show.

(SEOUL) January 11, 2018 – Ahead of the global debut of the all-new 2019 Kia Forte sedan at the upcoming North American International Auto Show (NAIAS), Kia Motors today revealed design renderings of the compact sedan.  While the third-generation Forte retains its sporty and youthful image, it has graduated with a more sophisticated appearance thanks to a number of sleek and dynamic styling cues inspired by the Stinger fastback sport sedan. What is most noticeable is that the Forte has evolved from a cab-forward design to one that is decidedly swept-back.

Creases in the hood lend to the Forte’s muscular appearance and distinctive design traits on the front fascia, including a fresh approach to Kia’s signature tiger nose grille and an aggressive lower valance enhance its road presence.  The front clip is flanked by a more dynamic headlamp design and layout.

Around back, the rear bumper gets the same treatment with separate reverse and turn signal indicators located beneath the taillights. Similar to the Sportage compact crossover, a sleek horizontal strip connects the taillights, lending visual width.

Inside, a horizontal theme creates a sense of openness, avoiding clutter with clean lines and minimal buttons that are intuitively placed below a large screen. Aeronautically inspired spoked circular vents similar to those found in the Stinger adorn the dash.