Skoda has launched a new variation of its Karoq SUV... but it's made of cardboard. Yes, the Kid Karoq is made entirely from cardboard. You'll be pleased to know it's a one-off, and there are no plans to put it into production. Good news really, imagine a cardboard car in bad weather...

So why on earth has one of the most sensible manufacturers out there done one of the oddest things a car company has done in the last decade? Well, it's doing it for the kids: "The handmade Kid Karoq has been designed as the perfect play area for those who aren’t quite old enough to enjoy the many grown-up toys available in the brand’s all-new compact SUV," said Skoda in its press release attached at the end of the article. The Czech company even surveyed a bunch of children when putting the car(dboard) together, and added in all the features they said they'd put in their ideal car. 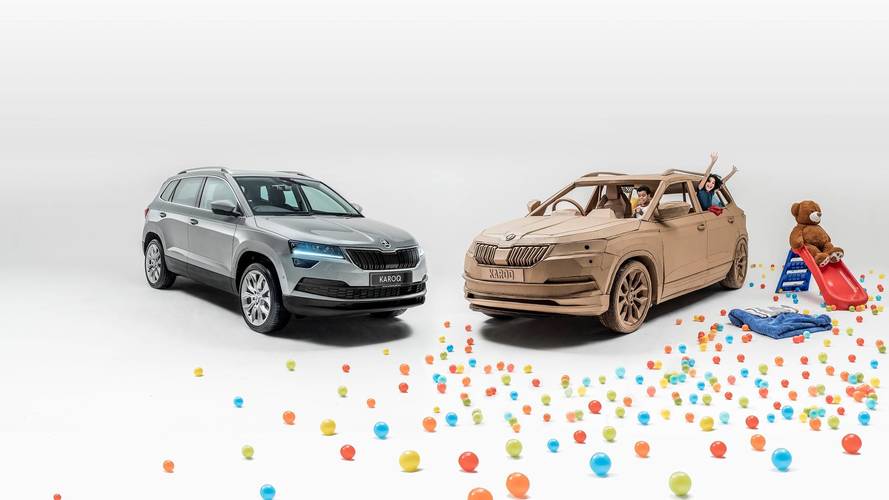 The children surveyed said they'd want the ability to play music of their choice (42.5 percent of those questioned), a tablet to play and stream programs on (67.6 percent), and an integrated movie projector (35.4 percent). For good measure, Skoda also added in Wi-Fi, a portable games console installed in the dash display, a digital tablet that controls a set of wireless Canton speakers, and instead of ambient LED lighting found in the real Karoq, there's a multi-colored disco ball – why that's not an option on the real thing, we don't know.

To top it all off, there's a secret den where an engine would be, and a slide and ball pool containing over 1,500 balls – the precise number of balls that fit into the real Karoq’s 1,810-liter trunk space (with the rear seats folded), or so Skoda say – we can't say we've tried ourselves.

The 1:1 scale replica took British design studio Lazerian 10 weeks and more than 600 hours to put together, and was produced to celebrate the launch of the Karoq, Skoda's second production SUV.

5 Photos
By: Dominik Wilde
Published by: Adrian Padeanu
++
Got a tip for us? Email: tips@motor1.com
Hide press releaseShow press release

ŠKODA CREATES THE WORLD’S MOST CHILD-FRIENDLY SUV… FROM CARDBOARD

Milton Keynes, 9 January: Known for some of the most family-friendly cars in the business, ŠKODA has taken things a step further with the creation of a special one-off Karoq made entirely from cardboard. The handmade ‘Kid Karoq’ has been designed as the perfect play area for those who aren’t quite old enough to enjoy the many grown-up toys available in the brand’s all-new compact SUV.

The life-size cardboard creation took 10 weeks and more than 600 hours to construct by British design studio, Lazerian, and has been built to the exact scale of the real Karoq: 4.4 metres long and 1.6 metres tall.

Commissioned by ŠKODA UK to celebrate the launch of the new compact SUV, which goes on sale in the UK on 11 January 2018, the brand drew inspiration for the cardboard version from 1,000 kids aged 6 to 11 - who told ŠKODA what features they’d pack into their perfect car.

Among the highest polling responses from the kids’ survey were the ability to play music of their choice (42.5%), a tablet to play and stream programmes on (67.6%), and an integrated movie projector (35.4%) – ideal to watch family favourites.

The research further highlighted that kids’ imaginations are as active as ever - almost three-quarters (73.5%) of children surveyed said that they have built their own cardboard creations.

Inside, the Kid Karoq has everything the children asked for – plus some additional goodies. Mini-motorists can climb into a hand-crafted driver’s seat and play with a portable games console installed in the dash display.

The cardboard centre console also houses a digital tablet that controls a set of wireless Canton speakers, and mirrors many of the features found in the real Karoq’s 9.2-inch Columbus infotainment system. This means they can choose the music without pesky grown-ups changing the track. In the absence of the LED ambient lighting found in the real Karoq, children can dance the day away under a multi-coloured disco ball.

A slide and ball pool takes pride of place in the Kid Karoq; containing over 1,500 balls – the precise number of balls that fit into the real Karoq’s cavernous 1,810 litre boot space. Other features include WiFi hotspot, a film projector, play-time bean bags and a toy box. The design team even managed to create a secret den underneath the bonnet where children can keep an eye on the outside world through cleverly disguised spy holes.

Although the one-off Kid Karoq is not for sale, the real Karoq is starting from £20,875 OTR and sets new standards for connectivity, practicality and comfort in what is one of the most competitive sectors of the new car market.

As with its larger sibling – the seven-seater Kodiaq – the Karoq delivers the perfect balance of practicality, comfort and value. Striking looks and a raft of new driver assistance systems and in-car technology are the hallmarks of ŠKODA’s growing family of SUVs.