Wear These Airbags Around Your Hips, Because People Crash Too 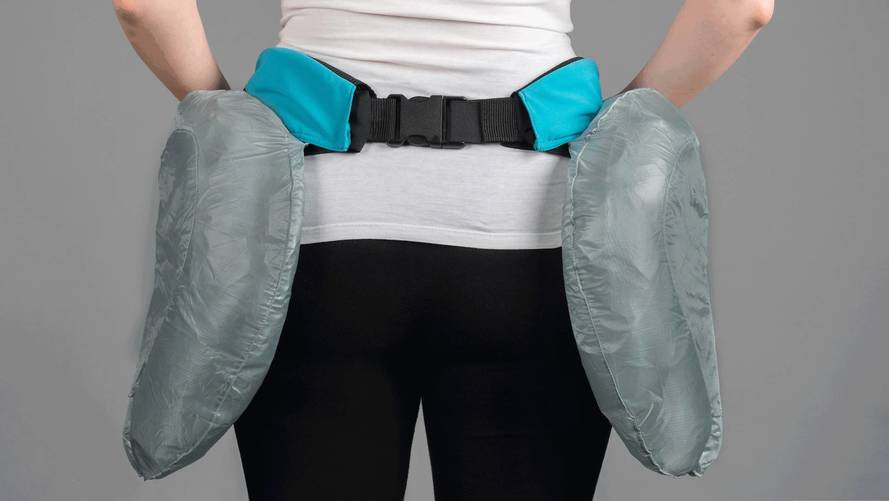 This CES debut could save your loved one from a serious fall.

In the same way that airbags protect passengers from serious injury in vehicles, one company has introduced a product that aims to protect seniors – or anyone with hip issues, really – from potentially dangerous falls. Unveiled at CES, the Hip’Air by Helite is the "world’s first wearable airbag," and though it may look silly at first glance, it could prevent serious injury to a loved one in the near future.

At a retail cost of $790 – not including $50 for the one-use gas canister – the airbag-equipped belt uses gyroscopes and accelerometers to detect a fall within 200 milliseconds, says the company. The airbag deploys in just 80 milliseconds, combining to deploy before what Helite estimate to be an average fall time of 400 milliseconds. The video below gives you an idea as to how the technology works.

The two airbags pictured here inflate just above the hips and absorb 90 percent of the impact, compared to just 10 percent in typical padded underwear. The belt weighs in at just 2.2 pounds, and features a plastic buckle at the front. It even comes with arrows to tell you which way to wear it, and beeps if you put it on the wrong way.

For what it’s worth, Helite is the same company that produces airbag-equipped jackets for motorcycles, so we know the company has the ability to bring the technology to market. At $790, though, it is a bit pricey compared to typical padded underwear, which range from about $40 to $100, depending on the brand.

The Hip’Air will launch in Europe in March, before going on sale in the U.S. in September.