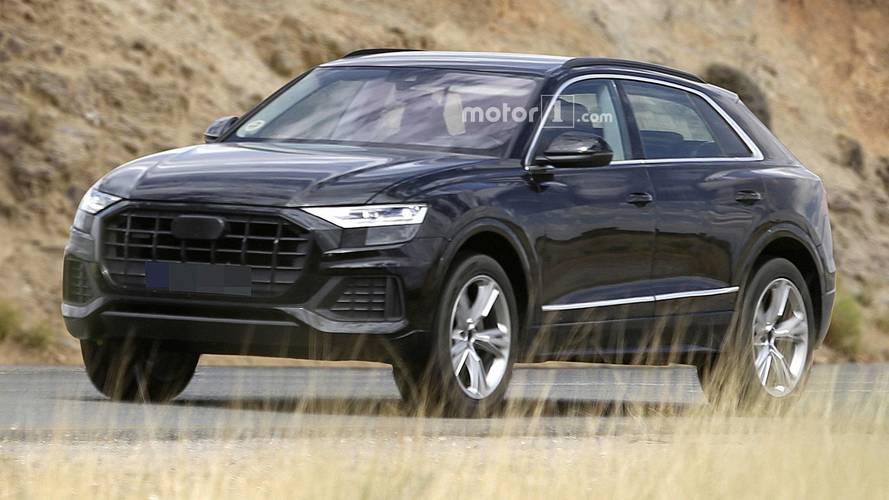 Looking quite Urus-y, Audi’s flagship SUV has been spotted quite possibly one last time ahead of its official reveal. Taking into account the Ingolstadt marque didn’t make the effort to properly camouflage its first-ever Q8, logic tells us the debut will take place as early as next week at the North American International Auto Show in Detroit. If not, the wraps will come off in Geneva at the beginning of March.

Looks can be deceiving as while at a first glance the near-production Q8 may seem undisguised, there’s still some black tape applied by Audi onto the tailgate. Even so, you can easily see the taillights are actually wider as in reality the clusters extend onto the tailgate and appear to be interconnected through a light bar as seen in the Q8 concept as well as the Q8 Sport concept pictured below.

That’s the only piece of the puzzle missing right now as the rest of the Q8 looks to be camo-free, with the exception of the four-ring logo and the “Quattro” badge on large front grille. Fake air vents can be noticed up front, while at the back the exhaust tips seem to be decorative as well.

Essentially a coupe-ified, luxed-up version of the Q7, the forthcoming Q8 has already revealed most of its high-tech interior heavily related to the new A8’s cabin courtesy of spy images posted back in September last year showing the dual touchscreen layout. Engine options will likely mirror those of the fullsize sedan from where the luxobarge is expected to inherit most of the hardware.

If you’re finding the standard Q8 a bit on the boring side when it comes to the exterior design, a meaner-looking RS Q8 is likely on the agenda as part of Audi Sport’s SUV push. It should be out around the end of the decade with a design already previewed by the aforementioned Q8 Sport concept.