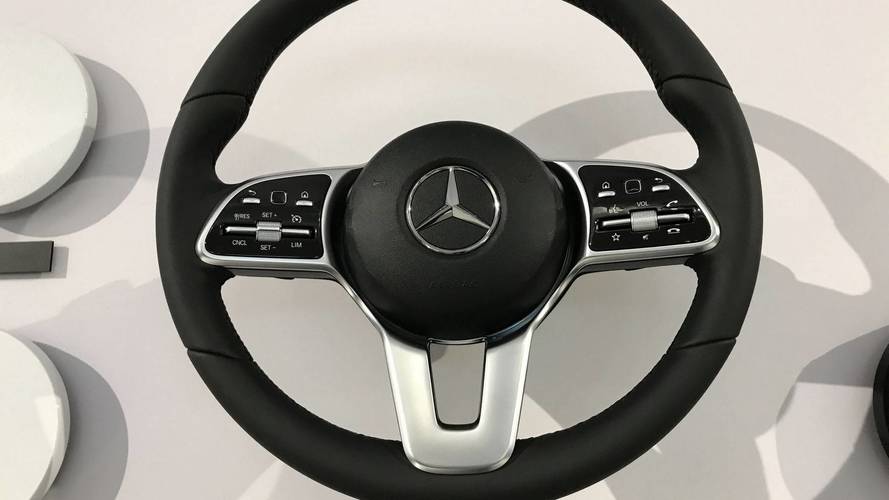 Say goodbye to the cruise-control stalk.

A steering wheel has about three basic functions – steer, honk, and hold the airbag. However, since more and more technology is infiltrating today’s automotive cabin, automakers have been sticking various car-related controls on the steering wheel – from cruise control to audio and smartphone controls. So, when we found close-up images of three different steering wheels of the 2018 Mercedes-Benz A-Class, it was hard not to take notice.

The design between the three is the similar, with the only difference being in material and finish. Looking at them, it would be hard to distinguish the steering-wheel functions from one wheel to one from a different manufacturer if it wasn’t for the Mercedes logo front and center. It appears paddle shifters are on all three.

While the A-Class sedan will be an all-new product in the U.S., the compact offering is seeing some other firsts as well regardless of the market. According to, Mercedes-Benz-Passion.com, the site where the images were discovered, the new A-Class will have a heated steering wheel for the first time. This steering wheel design was first seen on the new S-class.

Other steering-wheel functions include audio volume, phone connectivity, and what appears to be home and back buttons, and control pads for both the instrument cluster and infotainment system.

The 2018 A-Class is expected to go on sale later this fall for less than $30,000, making it the cheapest option for customers to get into the driver’s seat of a Mercedes. The new compact sedan will also come with a brand-new infotainment system called the “Mercedes-Benz User Experience.” This comes with a 10.25 touchscreen display, which you probably won’t be touching too much if you’re sitting in the driver’s seat.