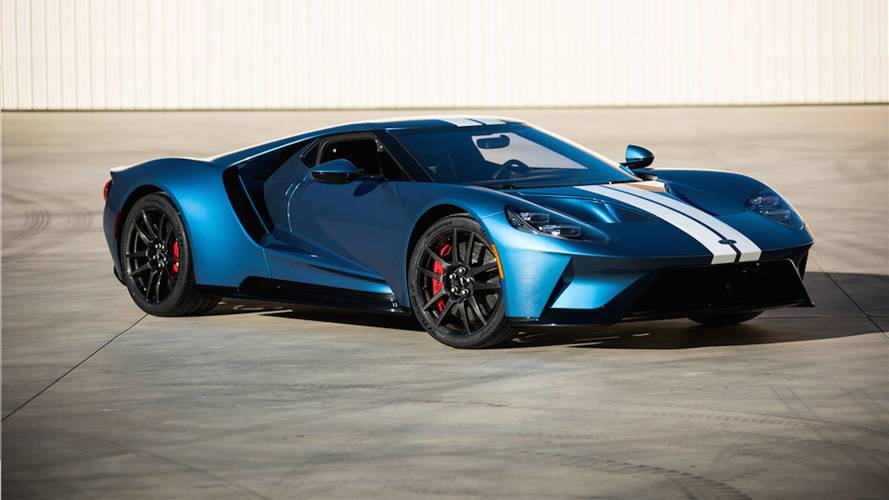 All proceeds benefitted the Autism Society of North Carolina’s Ignite Program, and the Autism Alliance of Michigan.

Update: When the gavel dropped at Barrett-Jackson this past weekend, this handsome Ford GT went home for a whopping $2.55 million, with all proceeds benefitting The Autism Society of North Carolina’s Ignite Program and the Autism Alliance of Michigan.

In the market for a pair of high-powered American supercars? Then the upcoming Barrett-Jackson Scottsdale auction may be the place to be. The auction house is kicking off its first sale of 2018 with two show-stopping headliners: the 2017 Ford GT, and the 2019 Chevrolet Corvette ZR1 – but these are no ordinary examples.

The 2019 Corvette in question is the very first example ever produced. It dons the same 6.2-liter supercharged V8 engine found in each one that followed, naturally, delivering 755 horsepower (563 kilowatts) and 715 pound-feet (969 Newton-meters) of torque. All proceeds for the sale of the ZR1 will benefit Building for America’s Bravest, a charity that builds smart homes for injured service members returning home.

The 2017 Ford GT in question is nearly as unique. It’s one of the earliest examples of the current generation, and was donated by businessman Ron Pratte to the Evernham Family-Racing for a Reason Foundation. Under the hood is the same 3.5-liter EcoBoost V6 that comes from the factory delivering 647 hp (482 kW) and 550 lb-ft (746 Nm) of torque. All proceeds from the Ford GT will benefit the Autism Society of North Carolina’s Ignite Program.

"We’re incredibly fortunate to have the resources to support wonderful organizations that strive to make a difference for so many people in need," said Craig Jackson, chairman and CEO of Barrett-Jackson. "To date, Barrett-Jackson has helped raise nearly $96 million for charity and those funds, along with the generous donations that will be raised in Scottsdale, bring much needed relief to countless people through many great charities."

Alongside the Corvette ZR1 and the Ford GT, Barrett-Jackson will have a handful of other unique vehicles cross the block, including the first retail production 2018 Corvette Carbon 65, a handsome 1988 Corvette 35th Anniversary Edition, and a 1987 Monte Carlo SS Aero Coupe, among others.

Barrett-Jackson is opening up the throttle to drive charity donations during its 47th Annual Scottsdale Auction, January 13-21, 2018, at WestWorld of Scottsdale. Rare and highly coveted vehicles set to cross the block for charity include the first production 2019 Corvette ZR1 (Lot #3009), the first retail production 2018 Corvette Carbon 65 (Lot #3007) and the first current-generation Ford GT (Lot #3010) that has been donated to be auctioned for charity. In addition, Carolyn and Craig Jackson have donated their personal ’88 Chevrolet Corvette 35th Anniversary Edition (Lot #3008) to kick off Barrett-Jackson’s yearlong initiative, “Driven Hearts,” to raise money and bring much needed support to the American Heart Association.

“We’re incredibly fortunate to have the resources to support wonderful organizations that strive to make a difference for so many people in need,” said Craig Jackson, chairman and CEO of Barrett-Jackson. “To date, Barrett-Jackson has helped raise nearly $96 million for charity and those funds, along with the generous donations that will be raised in Scottsdale, bring much needed relief to countless people through many great charities.”

The Barrett-Jackson Scottsdale Auction’s charity vehicles will include some of the most coveted vehicles on the planet, including the first production 2019 ZR1 Corvette (Lot #3009) featuring a new hand-assembled LT5 small block 6.2-liter supercharged V8 engine. Because Barrett-Jackson waives all fees on charity vehicles, the entire hammer price will benefit the Stephen Siller Tunnel to Towers Foundation. Also crossing the block will be the first retail production 2018 Corvette Carbon 65 Z06 Coupe (Lot #3007). One of only 650 Carbon 65 Editions produced, it is powered by a 6.2-liter supercharged V8 engine and automatic transmission with 100 percent of the hammer price benefiting the George W. Bush Presidential Center’s Military Service Initiative.

A 2017 Ford GT (Lot #3010) is the first current-generation GT that has been donated for charity and entire hammer price will benefit the Autism Society of North Carolina’s IGNITE program. Donated by businessman Ron Pratte to the Evernham Family-Racing for a Reason Foundation, the Ford GT couples its extraordinary power with impressive aerodynamic efficiency, making it the fastest Ford production vehicle on the track ever.

“Our 47th Annual Scottsdale charity docket features some of the rarest vehicles available for purchase in the world,” said Steve Davis, president of Barrett-Jackson. “But what makes these vehicles even more prized than their rarity is the fact they have been generously donated to aid people who are struggling and in need of help. We’re grateful to team up with the many great organizations that are a vehicle for positive change in our world.”

Carolyn and Craig Jackson’s 35th Anniversary Edition Corvette (Lot #3008) is one of just 2,050 built, featuring a 5.7-liter engine with automatic transmission and the Z01 option. As part of Barrett-Jackson’s yearlong charitable initiative, “Driven Hearts,” to increase awareness and improve heart health, 100 percent of the hammer price will benefit the American Heart Association.

“The collector car community recently lost a great man, Dave Ressler, who was incredibly philanthropic and a big supporter of our charity vehicles,” said Jackson. “Cardiovascular disease accounts for nearly one of every three deaths in our country, claiming more lives than all forms of cancer and chronic lower respiratory disease combined. Our ’88 Corvette is being auctioned to honor Dave and all those lost, and we’re grateful to support the American Heart Association in our yearlong initiative to drive awareness and increase their efforts to reduce disability and deaths caused by cardiovascular disease and stroke.”

Other vehicles crossing the block for charity in Scottsdale include:

In addition, Ford Motor Company will auction a special new Ford Mustang (Lot #3006) at No Reserve for charity. Details to be revealed on the Barrett-Jackson website prior to the car’s sale.