It has Lotus Elise headlights, Cadillac taillights, and it’s for sale.

Sometimes, the job of an automotive journalist is a double-edged sword. Sharing this, uh, Mustang-ish creation with the world is one of those times. We say that because a serious amount of work went into this build, which fuses the headlights from a Lotus Elise with the taillights off an older Cadillac onto an S197 Ford Mustang body, wrapped in all kinds of custom sheet metal from nose to tail. Such work is not easily done, requiring no small amount of legitimate skill and craftsmanship to complete. In other words, someone worked really hard to build this custom car.

That’s why it’s a little tough for us to blast out of the wheelhouse, digital guns blazing about how terrifically horrendous this car is. Just look at it – we challenge anyone to not envision a cross-eyed mime that just got kicked in the junk. The mini-fins on the back we can live with, and the Testarossa-themed side strakes are tacky but workable. But that nose . . . it’s the thing Freddy Krueger has nightmares about. And yes, it's for sale.

According to the Craigslist ad, it’s based from a 2007 Ford Mustang rocking a V6 engine with an aftermarket supercharger bolted on for a bit more power. It also has remote door latches, a leather interior, satellite radio, and the entire bulbous front clip tilts forward like a big Kenworth semi-truck to reveal the engine. And yet, despite all this work, the car still rides on entry-level Ford V6 Mustang wheels. Seriously? We're feeling a bit less guilty about hating this car. 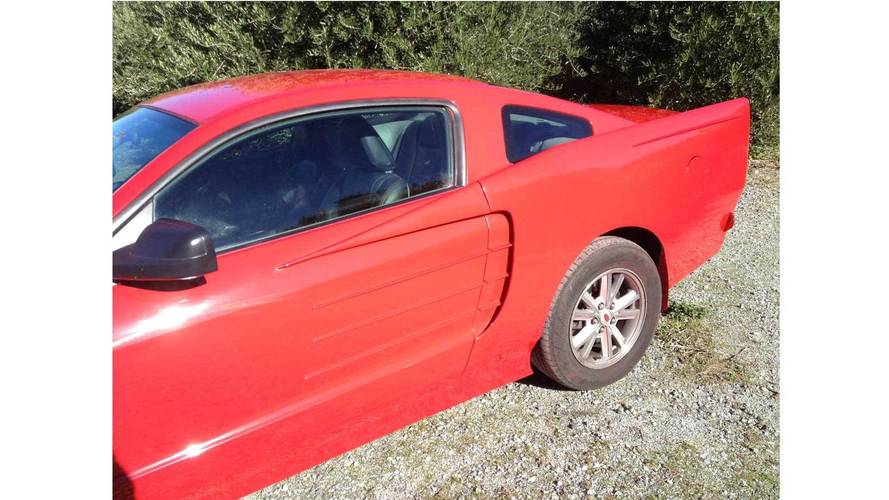 A link in the ad directs potential buyers to www.sheetmetalhappens.com, which apparently is the website for Carl Muia, the builder of this Mustang. Here’s where we’ll dish out some love, because this guy is seriously talented when it comes to fabrication. Visit the page and look at some of his other creations – aside from some absolutely beautiful metal artwork shown on the site, we see a few customized classic cars from the 1940s that Muia built, and they look fantastic. So yes, he knows a thing or two about creating awesome stuff. The Mustang, apparently, was an exception to the rule.

We suspect Muia is the current seller, though we can’t be exactly sure of that. We do know it’s offered up for $5,995, which is spot-on for a normal 2007 V6 Mustang according to Kelley Blue Book. Of course, this car is in a completely different universe from normal, and if we’re brutally honest, we suspect all the custom work seriously detracts from the value.

In any case, we wish the seller well while reminding all the would-be custom car gurus about this golden rule when it comes to special projects: Just because you can build something doesn’t mean you should.