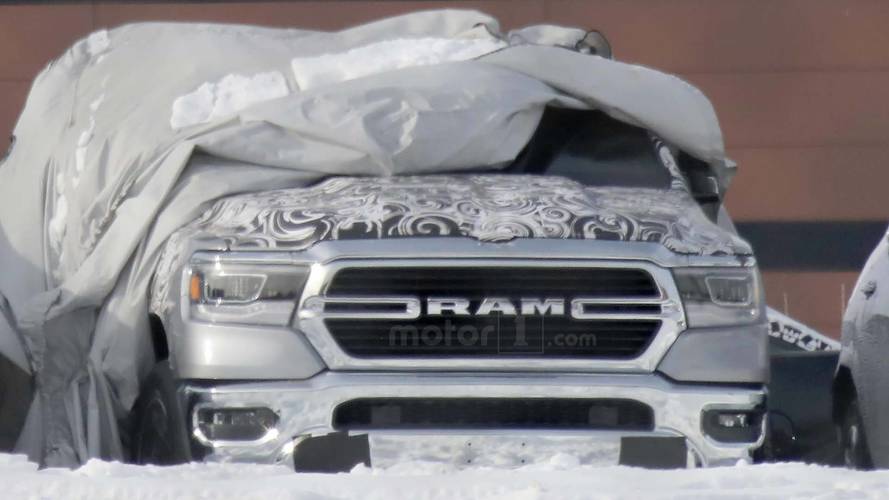 We probably won't see the rest until the Detroit Auto Show in a couple weeks.

By now we’ve had a pretty darned good look at the next-generation Ram pickup and its spiffy new front end design. In fact, we ran most of these photos about a week ago but we've since managed to catch the truck’s nose – from hood to bumper – completely exposed. We don’t know if a wind gust tugged at the coverings, or if it was lifted momentarily to open the hood. In any case, we can see the Ram will still sport plenty of chrome up front for truck buyers who want it, while being a very handsome improvement from the previous generation.

Obviously, the biggest change comes from ditching the larger-than-life grille for a new addition that still captures the essence of the old design without being so bulky and oddly proportioned. In fact, the whole front clip seems to blend with the rest of the truck in a much more satisfying manner, creating a sharper look that’s more befitting of the times.

What else do we know about the new Ram? The redesigned truck also gets a fresh backside with new taillights and bumper designs, and we’ve seen prototypes with split tailgates running around as well, though this particular truck doesn’t seem to have the option. It will also soldier on with steel for the cab and bed, nixing the lighter aluminum used by Ford for the F-150. Inside will get a refresh as well, including a larger infotainment screen with redesigned controls in a layout similar to the current model. Power will initially come from V6 and V8 engine options, with rumors of a V6 diesel as well as turbocharged four-cylinder models and hybrid setups showing up in the future.

We don’t have long to wait for full disclosure. FCA is slated to reveal the new Ram in just a couple weeks at the North American International Auto Show in Detroit.