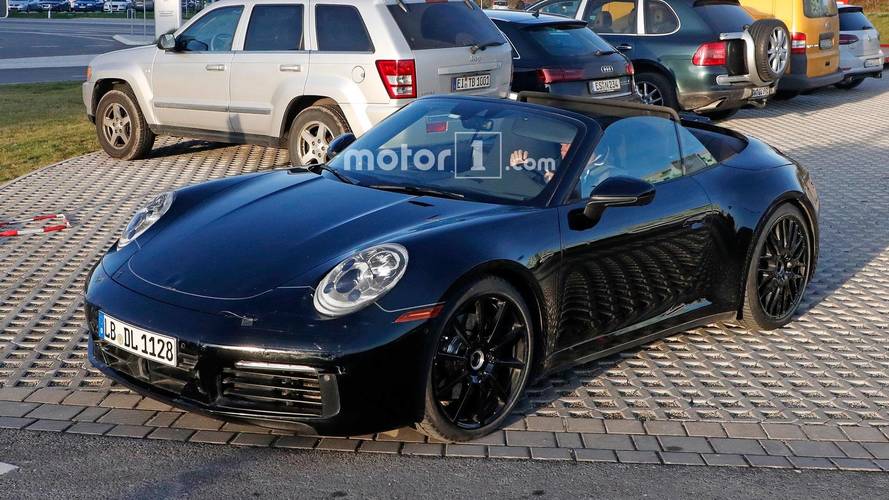 Check out those bulging rear fenders. They look great.

Being the engineer that gets to evaluate the new Porsche 911 must be pretty nice, expect when the vehicle in question is the next-gen Cabriolet with the top down on a day with single-digit temperatures. This guy puts on a hat and presumably cranks the heat to get the work done. The first spy photos of the next-gen 911 with its roof folded away are the result of this guy's hard day on the job.

Unlike many automakers that cover test mules in swirly camouflage, Porsche generally paints its prototypes black and uses a mix of fake panels and tape to conceal the body. This tactic makes our job a little harder to figure out what's real and which parts aren't for production. Here, you can see tape over a portion of the front fascia, suggesting this part is still under development. Further down, the big camera in the center and smaller one on the right side indicate new driver assistance tech for the 911.

The new Cabriolet's most photogenic angle is the front three quarters, though. The bulging rear fenders are aggressive and sexy, especially with the top down where the lack of a roof accentuates the size. Porsche puts the most effort into concealing the rear end. Tape holds the wires for the third brake light, indicating this isn't a final piece. A panel also hides where the taillights wrap around the side of the vehicle. The bumper is clearly a placeholder because there's no way the company would let the road-going model look so rough back there.

Recent spy shots reveal the new 911's cabin (above), and the design might be polarizing among fans because a stubby, angular gearshift looks out of place in the otherwise curvaceous vehicle. A new instrument panel now uses digital displays other than the analog tachometer in the center. The infotainment screen is at the same level of the instruments, and the interior design flows nicely between them.

Powertrain details are the biggest mystery at the moment. Even base models of the 911 would continue to use a turbocharged flat six, but expect a boost in output over the current engines.