A diesel SUV lines up with a hot hatch. Does the less powerful, but lighter Ford have an advantage?

Pitting two completely unrelated vehicles against each other can yield interesting results. In a new video, Top Gear decides to find out how the Audi SQ7 and Ford Focus RS compare in a drag race.

SQ7 Facelift Is Out: 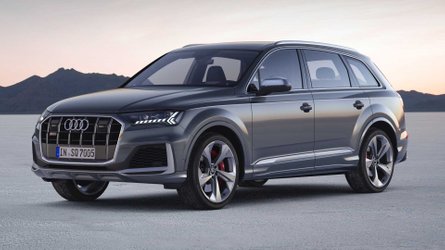 The SQ7 points to the future of performance vehicles because in addition to a pair of turbochargers for its 4.0-liter diesel V8, Audi also installs an electric-powered compressor. The result is 429 horsepower (320 kilowatts) and 664 pound-feet (900 Newton-meters) of torque. An eight-speed automatic and an all-wheel-drive system lets the big SUV reach 62 miles per hour (100 kilometers per hour) in 4.8 seconds and an electronically limited 155 mph (250 kph). The sprint is fairly impressive for a vehicle that weighs a hefty 5,170 pounds (2,345 kilograms).

The Focus RS gets its performance from more traditional means. A 2.3-liter turbocharged four-cylinder pumps out 350 horsepower (261 kilowatts) and 350 pound-feet of torque (475 Newton-meters) through a six-speed manual and to a torque-vectoring all-wheel-drive system. The hot hatch can reach 62 miles per hour in just 4.7 seconds, according to Ford. Plus, the model weighs 3,459 pounds (1,569 kg).

Given these specs, the Focus RS weighs significantly less and accelerates to 62 mph in a fraction of a second quicker than the Audi. It enters this race with a clear advantage, but the results aren't so simple. One equalizing factor comes down to driver skill – or a lack thereof. The SQ7 has an automatic gearbox, so the person behind the wheel just needs to mash the throttle down the course. Conversely, the Focus RS' six-speed manual requires a human hand to get through the gears.

The two models' powertrains also probably make some contribution to the result. With three forms of forced induction working together, the Audi is never off boost. Meanwhile, the Ford's driver needs to have some skill to keep the Focus' single turbo in the sweet spot.