In a new press release highlighting the most important new models for Volkswagen in the last 12 months, the German manufacturer is quietly confirming the next generation Touareg SUV will debut in the spring of next year. No more details are available at the moment, but we believe the vague announcement refers to the Auto China show in Beijing in April 2018.

Volkswagen promises new Touareg “has been redesigned right down to the very last LED” and our latest fully revealing photos confirmed that one of the oldest SUVs on the market will be completely overhauled. Compared to the model it will replace, the 2019 Touareg will be much more modern and sleeker looking, and slightly bigger.

The Touareg will be joining the Audi Q7, Porsche Cayenne, Bentley Bentayga, and Lamborghini Urus in switching to Volkswagen Group’s MLB Evo platform, which should bring a healthy weight diet. Depending on the market, the SUV will be available with a selection of turbocharged diesel and gasoline engines, and we expect the 2.0-liter gas and 3.0-liter diesel motors to be among the customers’ favorite. 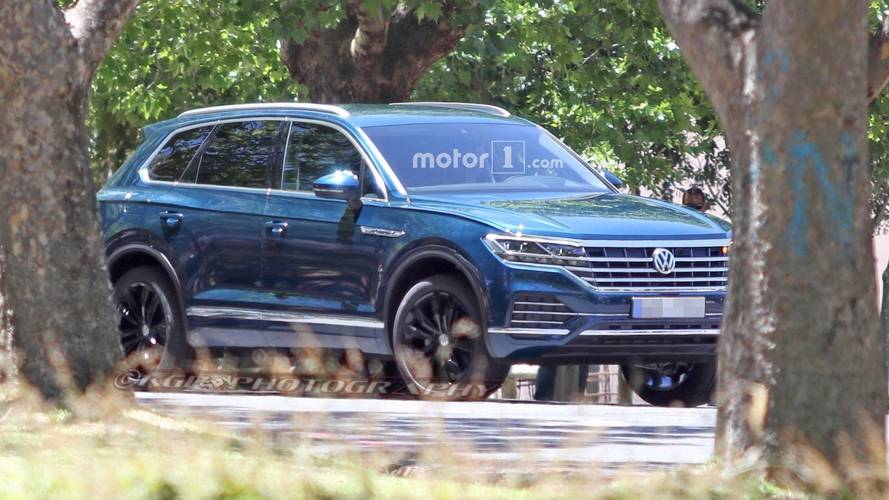 One of the most important improvements over the outgoing model will be the interior room, which will be significantly increased thanks to the new underpinnings. It will sit on top of Volkswagen’s model lineup and will be more luxurious than the Arteon, at least until (and if) a new generation Phaeton arrives in a couple of years’ time.

A report from August this year claimed that Volkswagen wants to expand its portfolio of sporty R models, and the new Touareg might be among the brand’s new models to receive the badge. It might get a potent V6 engine or Audi’s 2.5-liter five-cylinder turbocharged motor.

The new Touareg is already on the assembly lines at Volkswagen’s Bratislava, Slovakia facility.

Successful product campaign in 2017:
Volkswagen on course for the future

Volkswagen launched one of the most successful product campaigns in the company's history. It saw the debuts of new models such as the compact T-Roc SUV, the sixth-generation Polo, the avant-garde Arteon and the Atlas (USA) / Teramont (China) large SUV model series. One of the most important cars on the world market, the Golf, was also raised in all versions to a new, technical level. Meanwhile in Brazil a totally new compact saloon was launched: the Virtus. This transcontinental product campaign contributed to Volkswagen Passenger Cars being able to increase its number of vehicles supplied in the first eleven months of the year to 5,417,900, up 4.0 per cent. In addition, Volkswagen firmed up in 2017 the time frame for the introduction of the all-electric models of the new I.D. Family. The Volkswagen highlights of the year in a nutshell:

Polo. Volkswagen has completely redesigned the Polo. With an armada of driver assistance systems, digital instruments, glass-encased infotainment systems, a high degree of connectivity and innovative drive systems such as the natural gas 1.0 TGI (66 kW / 90 PS1) turbo engine, which depending on source is practically CO2-neutral, and the 2.0 TSI (147 kW / 200 PS2) engine of the GTI, in 2017 this Polo catapulted itself right to the front in terms of engineering and technology.

Golf, Golf Variant, Golf Sportsvan. In 1974, the first Golf came onto the market. Well over 34 million of the best-selling car have since been produced (as at 30 September). In 2017, Volkswagen developed a technical and visual update for all versions of the Golf, Golf Variant and Golf Sportsvan. New on the drive system front: efficient 1.5 TSI engines with Active Cylinder Management. The new petrol micro hybrid 1.5 TSI ACT BlueMotion (96 kW / 130 PS3/4/5/6) with temporary complete engine
shut-off works here in a particularly sustainable manner. Innovative engines of this kind suit the Golf well: no other car in the world is – as it is – simultaneously offered as a petrol, diesel, natural gas, plug-in hybrid and electric version.

Virtus. In November the new Virtus had its world premiere in Sao Paolo. The compact saloon is based – like, for example, the current Polo and Golf – on the modular transverse matrix (MQB). With a length of 4.48 metres the fastback model can be seen as fitting in between the Golf and Golf Variant. The new Virtus is part of a product campaign begun in Brazil in 2017, with twenty new Volkswagen models due to be launched there by 2020.

T-Roc, Tiguan Allspace and Atlas/Teramont. The SUV range has been considerably expanded this year. This campaign was launched back in 2016 with the debut of the second-generation Tiguan. In 2017, Volkswagen broadened the spectrum of this highly successful model with the addition of the longer, five- and seven-seat Tiguan Allspace (USA: "all-new" Tiguan / China: "All New" Tiguan L). Below the Tiguan, meanwhile, the new T-Roc took centre stage – a charismatic compact SUV for the urban world. Above the Tiguan another newly developed SUV has also been impressing since 2017: the Atlas (USA) and the sibling Teramont model created for China; in each case with up to seven seats.

Arteon. Between the Passat, which is offered in various versions around the world, and the Phideon developed specifically for China, a new Gran Turismo took off in 2017: the Arteon. The five-seat saloon combines the design elements of a sports car with the elegance and space of a fastback. Thanks to extensively interconnected driver assistance systems, the Arteon facilitates some initial partly automated driving functions. These include Traffic Jam Assist, using which the five-door car moves through
stop-and-go traffic automatically (at up to 60 km/h and within system limits).

up! GTI, Touareg. We will be continuing full steam ahead in 2018. To begin with Volkswagen will be bringing new dynamism to the small car market with the launch of the 85 kW / 115 PS7 up! GTI, for which advance orders are already being taken. The spring will then be dominated by the
third-generation Touareg8, which has been redesigned right down to the very last LED.

I.D., I.D. CROZZ, I.D. BUZZ. Furthermore, Volkswagen has set the course for the future of electric mobility. Speaking at IAA 2017, Dr Herbert Diess, Chairman of the Brand Board of Management, firmed up on the debut year for the first Volkswagen zero-emission SUV: the I.D. CROZZ8 will arrive on the market by late 2020 – and thus in the same year as the compact I.D. 8 is launched. In California, meanwhile, Dr Diess and Dr Eckhard Scholz, Chairman of the Board of Management of Volkswagen Commercial Vehicles, announced in August that the zero-emission I.D. BUZZ8 MPV – the reinterpretation of the Bulli – will be the product highlight of 2022. Electrifying prospects…