New Toyota Crown Gets Sporty Attitude Thanks To Modellista 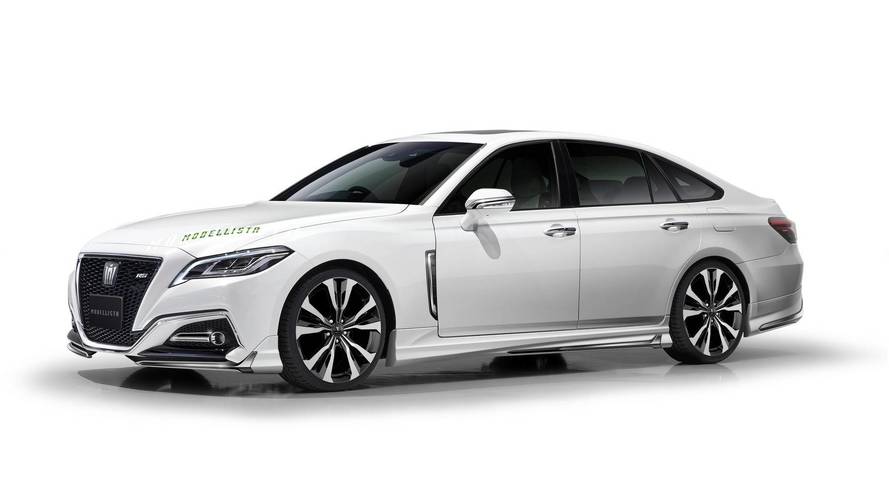 Unless you're living in Japan, you can't have it.

Toyota unveiled the all-new Crown large sedan a couple of months ago at the Tokyo Motor Show as a concept, though it was close to the production version as possible. Now in its fourteenth generation, the Crown continues to be one of the most luxurious models ever made by Toyota, but still not the flagship as that role is reserved to the retro-flavored Century, which is also being renewed for 2018.

Getting back to the Crown, it will be exhibited at the Tokyo Auto Salon next month where it will show off an assortment of exterior upgrades courtesy of Modellista. Following the launch of the Camry Modellista Edition, now time has come for the stately sedan to get an array of goodies granting an aggressive look without overdoing it.

Changes can be noticed at the front where the bumper now has more metallic accents and is accompanied by a newly developed spoiler lip lending the Crown a meaner stance. Moving on to the side profile, there are some (fake) air vent elements on the front fenders, along with a beefier set of skirts, different wheel design, and additional metallic trim on the mirror caps.

The most obvious modifications have been made at the back where the bumper now hosts square (instead of round) quad exhaust tips flanking a pseudo diffuser. The cutouts for the end pipes have also gone through some changes, though the update is quite discreet.

You’ll be able to check out the Toyota Crown by Modellista in the metal at the Tokyo Auto Salon in Japan beginning with January 12. The production-ready model is slated to go on sale next summer and chances are these items will be available from day one for those eager to spice up the Crown.