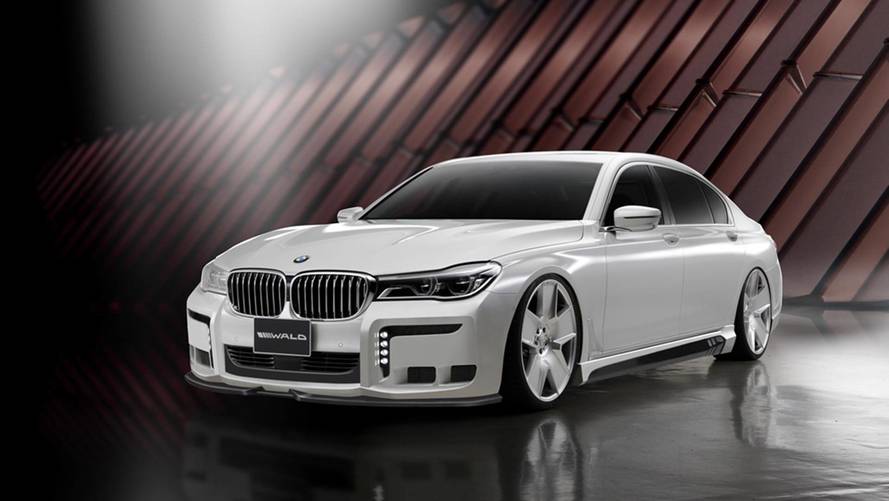 Putting two, big L-shaped opeings in the front fascia is an unorthodox styling choice and not necessarily an attractive one.

The latest in the Black Bison line of body kits from the Japanese tuner Wald International does quite a number on the BMW 7 Series. The pieces transform the look at the front and rear of the big, German sedan, and the owner is sure to get lots of stares as onlookers ponder the massive changes to the car's aesthetics.

The Black Bison kit includes new front and rear bumpers and side sills. In these shots Wald also shows it with the firm's wheels and an aftermarket exhaust.

The most prominent part of the new nose is the L-shaped intake on each side with vertical array of LEDs. Small, square-shaped inlets are at each corner, and a rectangular opening with horizontal slats is in the center. Where the stock 7 Series has an understated elegance at the front, the Black Bison kit is brash. The hard edges don't really match with the rest of the sedan's curves, and the huge difference makes your eye go to the angular elements immediately.

There's a similar problem with the side sills. They don't fit with the way that the 7 Series tapers inward. So despite having an interesting shape, they look stuck onto the side of the car.

The rear bumper (above) is arguably the best part. BMW's stock design might be a little too understated back there, but Wald International adds attractive creases at each corner, and there's a simulated diffuser at the back. The aftermarket exhaust that the company fits is ugly, but some more traditional dual oval outlets would probably look good with the new bumper.

The Black Bison kit's polarizing look might actually be an advantage. If there's a 7 Series owner in the world looking to make an entrance around town, these parts would certainly fill the role. Nothing else on the street would look anything like this.

WALD International is the one of the leading companies for the After-Parts Industry, and our business philosophy is not influenced by the trend. Continually creating the style and market by giving concrete form to our own sense of beauty for our products. Our mission and target are to discover the new things, to sympathize with it and to furnish the extraordinary emotions. Based on the above, we have sharpen our aesthetic sense for the design and supplied the unique products to all of our customers.