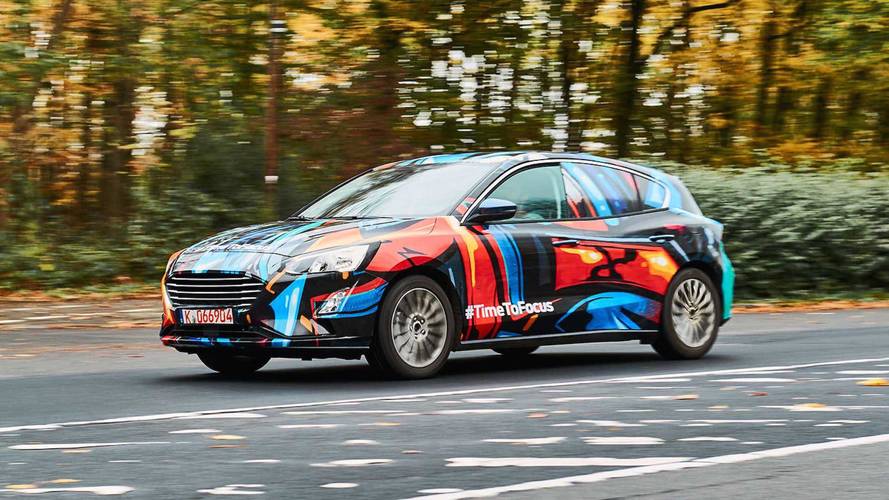 What bright colors you have, Ford Focus.

Ford continues its teasing campaign of the 2019 Focus leading up to its rumored debut in 2018. As early as November we captured the prototype on public roads – in both hatchback and sedan variants – adorning a brightly colored wrap, as well as the hashtag #TimeToFocus. But as Ford’s U.K. team signs off for the long holiday weekend, they leave us with one final look at the upcoming new hatchback.

Admittedly, the new image doesn’t show us much of what we haven’t already seen. The same prototype, wearing its eye-searing wrap and introducing the hashtag #TimeToFocus, is only slightly more distinguishable in this new lone image. Ford doesn’t say much about the photo, but suggests that 2018 will be "time to focus" on new products, "without commenting on the attached camouflaged medium-size test cars that have been tapped in Essex, Germany, and the U.S." Cheeky.

Of course, we already know that the Ford Focus will be manufactured at Ford’s Changan facility in China, a move that reportedly will save the company nearly $1 billion in costs compared to its original plan. U.S. versions of the Focus, meanwhile, will be imported from China and assembled Ford’s Wayne, Michigan plant.

As a whole, the Focus is expected to grow in size marginally over the current model. A new elongated wheelbase should free up even more space in the cabin, as well as add some much needed room in the trunk. Powertrain options remain a mystery, but we expect to see a 1.5-liter three-cylinder engine as the volume seller, with larger options available depending on the region.

Ford hasn’t confirmed when the new Focus will make its debut, but given the extensive amount of testing the hatchback has already undergone, we could see it as soon as January at the Detroit Auto Show. The Focus IV will hit the production line beginning in 2019.

Next year sees half a dozen significant Ford product launches in the first six months alone. New EcoSport will be with us by February, when we also welcome the latest Transit Custom — intent on continuing the CV icon’s 52-year leadership. A Tourneo Custom will follow before new Mustang brings a performance upgrade to 450PS ready for summer top-down grand touring. Meanwhile new Ford Fiesta’s Active crossover and hot ST versions are also still to come. All without commenting on the attached camouflaged medium-size test cars that have been papped in Essex, Germany and the US. Time to focus on those next year too.

We look forward to seeing and working with you again in the new year. Meanwhile, merry Christmas and thank you for your co-operation and humour throughout 2017.