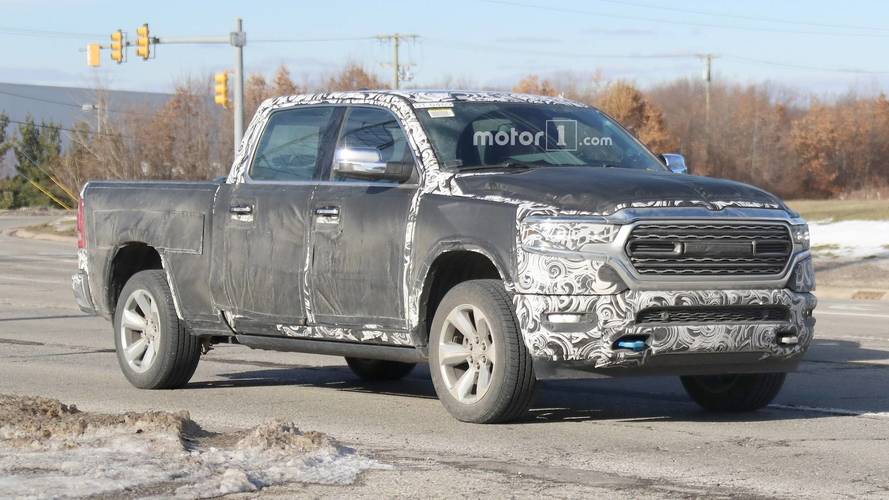 An edgier grille and new headlights give the Ram a more modern look.

In just a few weeks, Ram will show off its new and improved 1500 pickup in the sheet metal at the Detroit Auto Show. Spy photos of the rugged new pickup have been leaking out for the past few months, showing off features like an updated grille and a sharp new body, but this latest set will likely be our final look at the new truck prior to its January debut.

The most significant update comes in the front fascia. The grille now features sharper edges, accented by updated headlights and a chrome surround. This particular example appears to be a Limited model given its non-LED accented headlights, standard-looking wheels, and extensive use of chrome throughout the fascia.

The Ram 1500 will see a significant amount of changes out back, too, as noted by the photos. All new taillights that appear to be larger than the current units, and dual exhaust tips can be seen in the images. The rest of the bed is still well covered up by camouflage.

Though this new photo set doesn’t show any images of the interior, previous spy shots have given us a glimpse at the updated cabin, complete with new features like a larger infotainment screen, a more streamlined layout, and new toggles located underneath the screen.

The Ram 1500 will be available at launch with both V6 and V8 gas-powered engine options. A diesel V6 option won’t be available from the get go, but we expect to see one later down the line. Rumor has it that a turbocharged four-cylinder with a hybrid setup could also join the range in keeping in line with fuel economy requirements. The 2019 Ram 1500 will be shown in full at the Detroit Auto Show in January, before going on sale in the latter half of 2018.