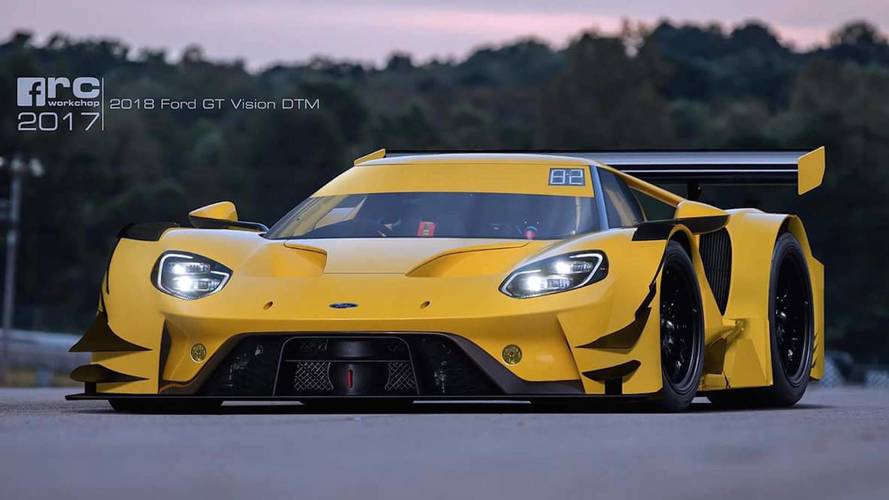 It'll never happen, but we can still dream.

The Ford GT has seen its fair share of success on the track. Thanks to a lightweight carbon fiber construction, and a powerful 3.5-liter biturbo EcoBoost V6 engine, the American supercar has taken home wins at Le Mans, 6 Hours of Fuji, 6 Hours of Shanghai, and others in the past year. But one series the supercar hasn’t been able to crack is DTM.

DTM, or Deutsche Tourenwagen Masters, was founded in 2000 and is designed almost exclusively for German touring cars… so the Ford GT doesn’t exactly fit the bill. Nonetheless, the supercar looks great wearing the bright yellow livery with the appropriate aero treatments equipped throughout the body.

It was designed by rendering artists RC Workchop and posted on Facebook. The image shows the Ford GT with a widened bumper, a more open grille, and new downforce-improving features up front, as well as as bigger tires, and a massive wing in the rear. It looks ready for DTM racing, even if it doesn’t fit the manufacturer qualifications.

If we had to guess, the same 3.5-liter EcoBoost V6 engine would be found under the hood. From the factory it produces 647 horsepower (482 kilowatts) and 550 pound-feet (746 Newton-meters) of torque. Ford says it has "one of the best power-to-weight ratios of any production car," as well as a top speed of 216 miles per hour (347 kilometers per hour).

While we likely won’t see the Ford GT in DTM anytime soon, we can still enjoy the supercar in the World Endurance Championship and the WeatherTech SportsCar Championship. Ford Chip Ganassi Racing is expected to take to the track again in 2018 behind the wheel of its two Ford GT racers.