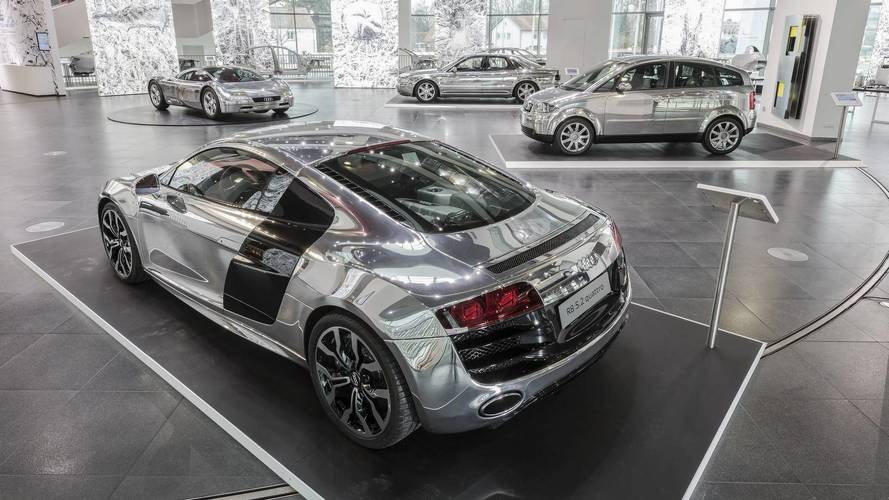 Head to the Audi Museum to see a naked R8 and the spectacular Avus Quattro concept from 1991.

Audi has a long tradition when it comes to using aluminum and it goes all the way back to the early days of the four-ring company, such as in 1923 when the Type K came out with a 3.6-liter engine featuring an aluminum cylinder block. To showcase how important the lightweight material has been throughout the years, the museum in Ingolstadt is now hosting an exhibition to highlight some of Audi’s most important cars that have made extensive use of aluminum.

By far the most spectacular car on display is the Avus Quattro, a concept introduced in 1991 at the Tokyo Motor Show. Weighing in at a remarkably low 1,250 kilograms (2,755 pounds), the supercar had a massive W12 engine with a 6.0-liter displacement and 502 horsepower delivered to all four wheels. Providing a low weight + high power combo, it comes as no surprise the showcar was an absolute rocket: 0-62 mph (0-100 kph) took only three seconds en route to a maximum velocity of 210 mph (334 kph). Not too shabby for a car built more than a quarter of a century ago, right?

It never made it as a production model, but the Audi Space Frame it used went on to serve as foundation for a multitude of other cars. For example, the ASF concept from 1993 – also on display – was a near-production study of the first-generation A8, which came out shortly thereafter. It took no less than 11 years and 40 patents to develop the body and make it production-ready.

It was well worth the effort as it ended being a whopping 40 percent lighter compared to a conventional steel body. Back in the day, Audi said it could have made it 60% lighter, but didn’t want to neglect safety. Not only was the aluminum body lighter than its steel counterpart, but in some areas it was nearly twice as thick, thus boosting safety.

Fast forward to 2002, the A2 supermini came out with an aluminum body and in its lightest configuration it tipped the scales at 895 kg (1,973 pounds). Unfortunately, the quirky city car was far from being a big hit for Audi, prompting the company to axe the model in the second half of 2005. To this day, it still hasn’t received a direct successor, despite numerous rumors of a revival.

Last but certainly not least, a naked R8 5.2 FSI Quattro showcar from 2009 is sharing the stage with other aluminum-intensive members of the Audi family. Currently in its second generation, the supercar is available exclusively with a naturally aspirated V10 engine, but a lesser version with a biturbo 2.9-liter V6 engine is expected to arrive as early as next year.