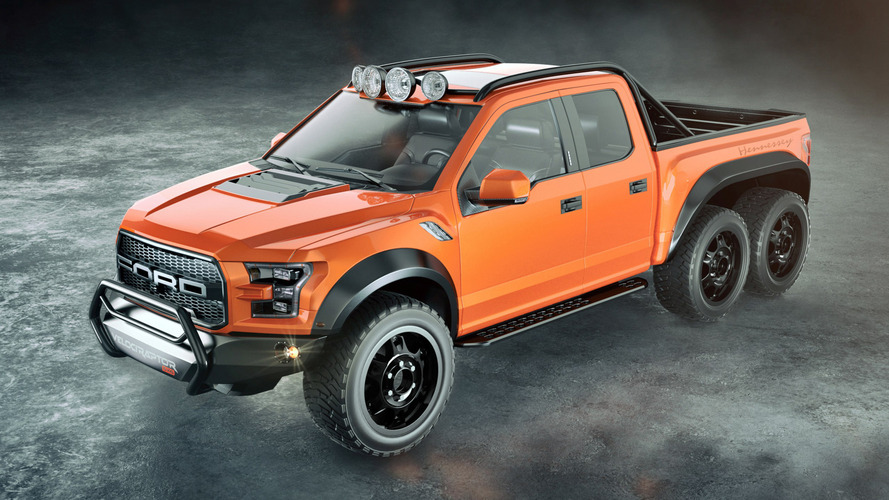 Just 50 examples will be built.

Why spend more than half-a-million dollars on a Mercedes-G63 6x6 when Hennessey is offering a similar six-wheeled conversion at a fraction of the price? The Texas tuner today released full pricing and order details for its Ford Raptor-based VelociRaptor 6x6, which starts at a slightly more reasonable $349,000.

Just 50 examples of the VelociRaptor will be built, and will be available to customers around the world. So get it while you still can. The truck was initially teased at SEMA earlier in the year, and each example takes more than 11 months to complete in full. The new creation acts as a sort of spiritual successor to the standard four-wheeled Hennessey VelociRaptor that was introduced in 2010, says the company.

"The VelociRaptor 6x6's appearance at SEMA was just a sneak peek, but we are done teasing," said John Hennessey, Founder and CEO of Hennessey Performance Engineering. "It is time to uncage our monster of a truck."

Power comes courtesy of a 602-horsepower (448-kilowatts), 622 pound-foot (843 Newton-meters) of torque V8 engine, giving the beastly SUV 152 hp (113 kW) and 172 lb-ft (233 Nm) torque more than the factory Raptor. All that added oomph gives it the ability to sprint to 60 miles per hour in just 4.9 seconds, and performance add-ons like six 20-inch wheels and Toyo Open Country tires, a Fox suspension, and 6x6 locking rear axles assure it’s just as capable on the road as it is off.

Hennessey Unleashes Goliath 6X6 To Dominate Life As We Know It

If you’d rather have a Hennessey Raptor of the four-wheeled variety, the company still offers the option. The VelociRaptor 600 comes with features like a raised suspension, 35-inch Toyo off-road tires, a 600-hp engine (447-kW), and a limited production run of just 100 examples. Both vehicles can be ordered through the Hennessey website.

The Velociraptor dinosaur, famous for its speed and intelligence in the Jurassic Park films, is computer magic. Hennessey's version that was teased at SEMA, the VelociRaptor 6x6 based on the Ford Raptor, is very real and very fast. Hennessey Performance Engineering is proud to announce that the VelociRaptor 6x6 is now being built for a limited production run of 50 vehicles. It will also be available for export around the world.

Hennessey Performance's $349,000 VelociRaptor 6x6 is an aggressive, in your face off-road beast. With 602 hp and 0-60 in 4.9 seconds, this six-wheeled monster can handle anything up to and including a Jurassic adventure with speed, power and unrivaled off-road prowess.

Taking 11 months from concept to finish, the VelociRaptor 6x6 is the successor to the original four-wheeled Hennessey Performance VelociRaptor, which debuted in 2010. Hennessey initially did not have plans to tune and customize pickups on a regular basis, but after a customer asked for a custom twin-turbo package on his 2010 Ford Raptor, the demand skyrocketed once enthusiasts saw what Hennessey could do. An appearance on Top Gear USA in 2011 didn't hurt demand either. To date, Hennessey has built more than 1,000 four-wheeled VelociRaptors.

"The VelociRaptor 6x6's appearance at SEMA was just a sneak peek, but we are done teasing," said John Hennessey, Founder and CEO of Hennessey Performance Engineering. "It is time to uncage our monster of a truck."

Details of the Hennessey VelociRaptor 6x6 include: