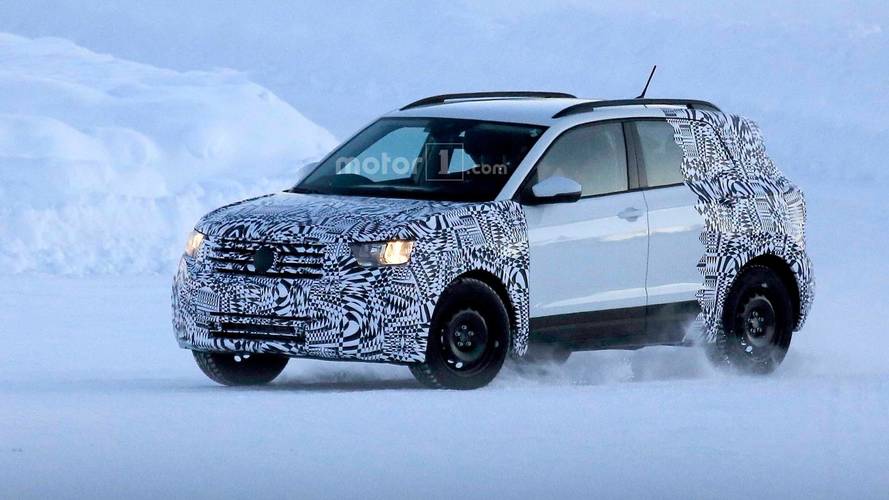 Here’s a first look at Volkswagen's new compact crossover, and it looks very cold as it undergoes winter time testing in Finland. The T-Cross is based on the company’s popular Polo subcompact, and will ride on the same MQB platform that underpins the Polo, Seat Arona, and several other small vehicles.

Despite the Polo connection, it’s expected to be closer in size to the slightly larger VW Golf, though styling cues are expected to tie with both the Polo and the larger T-Roc SUV. That means a full-width grille with a flatter front profile, which can be sussed out beneath the camouflage wrappings on this test vehicle if you look closely. We also expect to see some design elements from the T-Cross Breeze Concept that Volkswagen showcased back in 2016, albeit without the concept’s missing roof.

The spy photos show a rather bland looking machine, but the production version is expected to offer a range of two-tone schemes and contrasting color options that are becoming popular on competing compact crossovers like the Hyundai Kona, or the new Nissan Kicks. A Volkswagen insider reportedly said the T-Cross would be “very sporty” so hopefully the camo wrap in these spy shots is hiding more than just expanses of white.

Powertrain options are unknown at this point, though with its connection to the Polo it’s safe to assume engines will be similar as well. That likely means a selection of small four-cylinder mills with gas or diesel power, with the Polo GTI’s 2.0-liter turbocharged engine also a possibility. Expect standard models to have front-wheel drive, with all-wheel drive a possible option.

The T-Cross is expected to appear globally sometime next year. It’s part of Volkswagen’s aggressive mission to launch a smattering of new SUVs and crossovers by 2020.