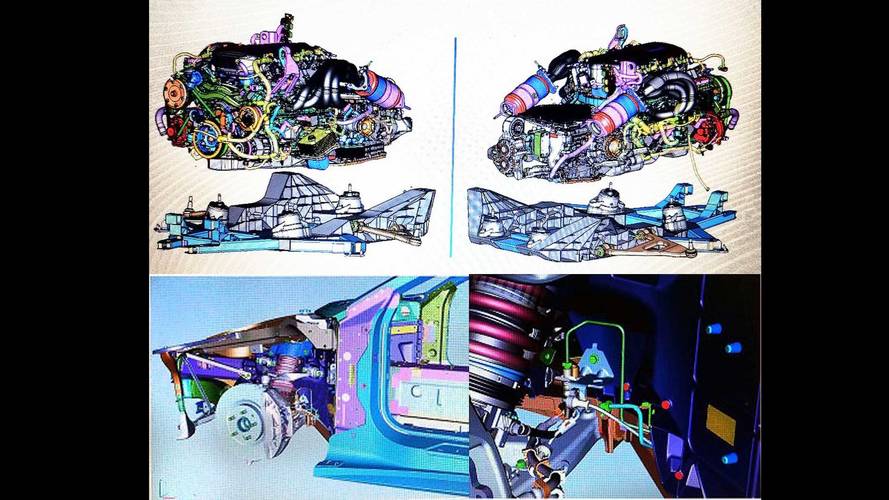 Are these the real deal or just an elaborate hoax?

Everybody knows a mid-engine Corvette is coming, but the members over at CorvetteForum got something of a surprise late yesterday. A new user with the curious name ZERV posted up a few pictures of CAD designs, showing the engine and bones of, well, something car-related. Those who aren’t used to 3D renderings like this might have some trouble understanding what they’re looking at, but the folks at CorvetteForum seem pretty darned sure this is the mid-engine C8 Corvette – or rather, parts of it beneath the skin.

Specifically, we’re getting a look at the front, the engine/transaxle, and the rear subframe on which the engine will sit. That is, if you think these images are legit, which CorvetteForum senior member firebirdfan adamantly believes. Among a list of observations the user gleams from the drawing are a very “beefy” transaxle, front suspension components that bear similarity to the last few Corvette generations, and an LT1 V8 engine.

We can’t quite pick out the same details that firebirdfan cites to identify Corvette-related bits, especially with the small size and grainy nature of the photos. But the engine does bear a resemblance to the current 6.2-liter LT1 V8. And it's also clearly in a mid-engine configuration with the upturned headers and transaxle clearly visible. As for the rest, we can only yield to Corvette experts who might be able to identify specific components.

Regardless of the details, the big question here is whether or not this is really the new mid-engine Corvette. The images themselves appear to be photographs of a computer screen – something we'd expect from a properly nervous leaker of info – and they conveniently show just enough detail to be interesting while stopping short of delivering a knockout punch. Then there’s the CorvetteForum user ZERV who originally posted the images. The name isn't a random choice – ZERV is believed to be GM’s codename for the mid-engine Corvette project, and the user is a new member with this post being the only one linked to the account. The original photos posted by ZERV were taken down, but not before another member uploaded them to imgur.

Did someone at Chevrolet decide to seek some internet glory by leaking legitimate engineering shots of the new C8 Corvette? Was the leak planned as part of a viral marketing campaign to generate buzz ahead of a potential reveal? Or is simply someone having a bit of fun by pulling on the heartstrings of Corvette enthusiasts? From our perspective, there's good evidence to suggest these are legitimate. There's also some evidence to suggest it was an intentional leak, as the new C8 could well be unveiled in just a few weeks at the North American International Auto Show. This would be a great way to generate some viral buzz before showtime.

In the end, only time will tell.