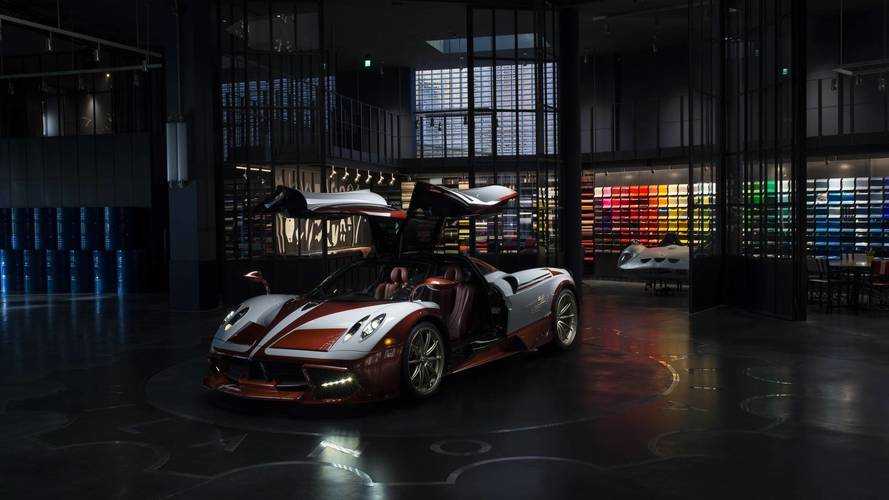 We never thought we would use the words "Pagani" and "Fiat" in the same sentence.

Lately we’ve been talking more about the immortal Zonda, but now the newer Huayra is ready for its close-up courtesy of Pagani and Garage Italia Customs. Meet the one-off Lampo (Italian for "lightning"), created with a retro theme in mind as the talented people behind the project used as inspiration the remarkable 1954 Fiat Turbina concept pictured below.

The most obvious connection between the two cars is represented by the red and white paint scheme harkening back to the unusual concept that received its name after the three turbines affixed to the mid-mounted engine. Fun fact: the 300-horsepower Fiat Turbina had an unbelievable drag coefficient of only 0.14.

Getting back to the Huayra at hand, it wears a newly developed carbon fiber fabric with aluminum inserts to make it shine bright and allow the color to pop. Some of the areas of the body are adorned with transparent paint and there’s also the Italian flag on the rear wheel arches to further create a connection between the modern supercar and the concept from more than 60 years ago.

This isn’t an ordinary Huayra as we are dealing with the upgraded version benefiting from the Tempesta package bringing a multitude of aerodynamic tweaks and new front openings to channel more to the intercooler radiators. To make it even more special, the golden hue of the old Fiat logo has been brought back to life and it now adorns the wheels as well as the aluminum body elements. The calipers of the Brembo brake system have received the Italian flag motif, while the side mirror caps feature three lightning painted in green, white, and red.

The interior is just as special as the body thanks to a rich mélange of materials, including everything from the brown leather to aluminum surfaces anodized using bronze paint.

According to Garage Italia Customs, this unique Huayra was developed over the course of two years, thus becoming one of the most time-consuming projects that Pagani has ever been involved in.