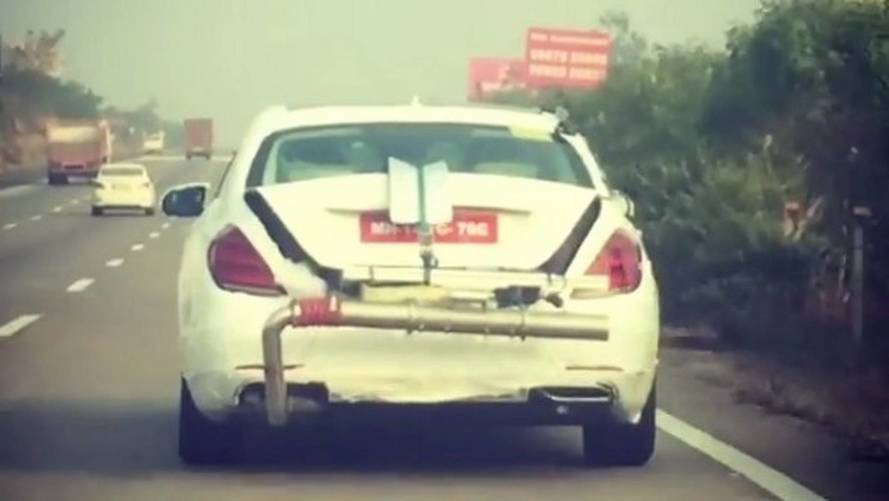 Here's something that you don't see every day.

Mercedes unveiled the facelifted S-Class back in the second half of April this year during the Auto Shanghai event in China, but the fullsize sedan won’t be going on sale in India until the beginning of 2018. Meanwhile, the luxobarge has to undergo emission testing to comply with the regulations applicable in the world’s second most populous country. If you were thinking the Chevy Corvette ZR1 had a weird exhaust arrangement, get a load of this prototype caught on camera while roaming the Mumbai-Pune expressway.

While the ZR1 had the peculiar setup simply because the standard exhaust was too loud for the Nürburgring, the S-Class facelift has this contraption for emissions testing. An L-shaped pipe is connected to one of the two exhaust tips of the car and is hooked up to a device placed inside the trunk, hence why the lid wasn’t properly closed. That hardware is used to measure the amount of emissions generated by the engine, which might have been one of the new inline-six units launched with the refreshed S-Class.

Elsewhere, the crown jewel in Mercedes’ range should get just about the same updates as the Euro- and U.S.-spec versions. Goodies include ultra-wide high beam LEDs for the mildly tweaked headlights, curve function (body tilts to the inside of the turn) to boost comfort, and the Energizing Comfort system bringing 10-minute “moods” to make those inside the lavish cabin feel even more comfortable.

A spy video from earlier this week has shown work is most likely well underway at the next-generation S-Class, which is expected to feature wider tracks as the test mule had wheel arch extensions at both front and rear axles. Expect to see it debut in production metal likely around the end of the decade.