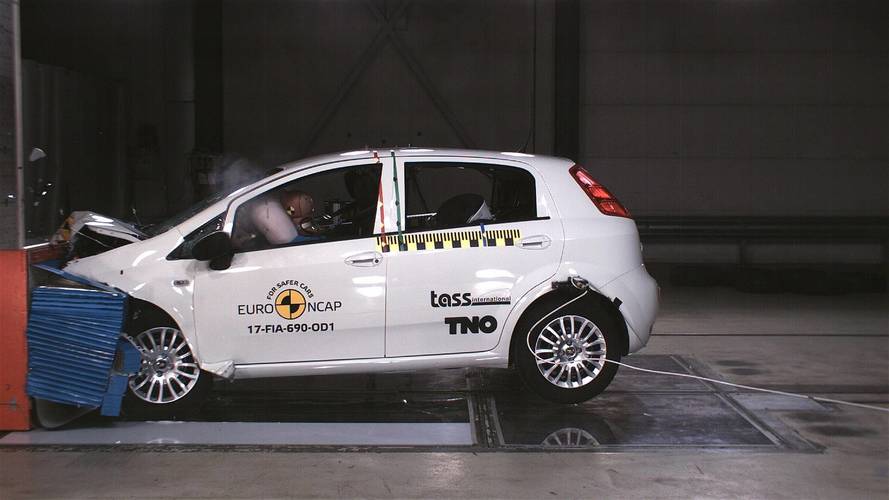 2017 was by far Euro NCAP’s busiest year and it’s coming to an end with a rather worrying result as the aging Fiat Punto did not manage to score even a single star during the last round of crash tests. Though that might not come as a big surprise taking into account the third-generation model has been around for more than a decade, specifically since the end of 2005. With the European New Car Assessment Programme becoming increasingly exigent over the years, the Italian supermini is certainly showing its age as a consequence of the more stringent tests.

It’s actually the first car to “score” zero stars in the European crash tests, prompting Euro NCAP to say the Punto has been “outclassed by every car tested in recent history.” The five-door hatchback was tested in the 65-horsepower, 1.2-liter specification with a five-speed manual gearbox and a curb weight of 1,030 kilograms (2,270 pounds).

The numbers really speak for themselves, with the Punto only getting a 51-percent rating for adult occupant safety and an even lower 43% for children. Things are a little bit better in terms of pedestrian protection (52%), but abysmal as far as safety assist (0%).

The Punto wasn’t the only car crash-tested by Euro NCAP as the new Dacia Duster, Kia Stonic, and the MG ZS were also evaluated – with all three getting three stars. It should be mentioned that with optional equipment, the Stonic is actually a five-star car. As for the three-star Aygo, it can get an extra one with the suitable optional safety kit. Other models on the three-star list include the Alfa Romeo Giulietta, Ford C-MAX / Grand C-Max, Opel / Vauxhall Karl, and the DS 3.

Should safety be of utmost importance, you’ll want to buy a five-star car and the Yaris is one of them. New arrivals include the BMW 6 Series Gran Turismo, Hyundai Kona,  Jaguar F-Pace, and Kia Stinger. In its standard configuration, the latter is only a three-star car in Australia as per the Australasian New Car Assessment Program (ANCAP) crash safety test rating, while upper-sec versions get the full five stars.

Attached below are 13 crash test videos and a collection of 101 images from the latest evaluation.

Today, Euro NCAP rounds off its busiest-ever year with new safety ratings for fifteen more car models. Five stars were awarded to the Hyundai KONA, the Kia Stinger, the fourth generation BMW 6 series and the Jaguar F-PACE released early last year.  Three stars were awarded to the MG ZS crossover, the Dacia Duster 2 and the Kia Stonic (five stars with optional safety equipment).
Faced with a competitive market-place and rapidly-changing consumer preferences, more and more manufacturers are choosing to extend the lifetimes of their models, often introducing only minor facelifts along the way to boost sales.  To allow consumer to make a fair comparison to new models, Euro NCAP has updated the ratings on several of recently facelifted cars.  Apart from the Toyota Yaris, that could keep its five-star rating, most of these cars have dropped to three stars in this year’s safety tests.  The list includes the Toyota Aygo(four stars with optional safety equipment), the Alfa Romeo Giulietta, Ford’s C-MAX and Grand C-MAX, the Opel Karl and the DS 3.  The most extreme example, however, is the FIAT Punto, which has been on sale since 2005 but is still a strong seller in Italy.  The aging supermini is outclassed by every car tested in recent history and becomes Euro NCAP’s first car ever to be awarded zero stars.
Euro NCAP Secretary General, Michiel van Ratingen, said, “We have seen a lot of good cars in 2017, able to meet Euro NCAP’s 5-star requirements.  Superminis like the new Polo, the Fiesta and the Ibiza now come with advanced safety technology as standard, offering the best in crash avoidance and crash protection.  The fact that older cars cannot compete illustrates the pace at which the vehicle industry is innovating safety and the willingness and ability of competitive manufacturers to meet the highest standards.  Those who do not keep their cars up to the latest standards get left behind, as these results clearly show.”
Euro NCAP’s rating scheme requires cars to score a minimum number of points in all four areas of assessment to qualify for even one star.  In areas like adult and child occupant safety and pedestrian protection, the Punto still performs well enough to qualify for at least two stars.  It is let down in driver assistance and crash avoidance: with only a seatbelt reminder system for the driver as standard, no points were scored in this part of the assessment.
Michiel van Ratingen, “This is perhaps the strongest example of a manufacturer continuing to sell a product that is well past its best-before date, at the expense of the unsuspecting car buyer.  We would urge consumers to check our website for the latest ratings and to choose cars with the most up-to-date five-star ratings, many examples of which we have seen in 2017.”