What is Mercedes cooking up?

It was towards the end of September when our spies caught on camera a rather mysterious S-Class that had modified wheel arches (see attached gallery below) and now another similar vehicle has been spotted. Seen in Germany in the company of three other Mercedes test vehicles sitting on a car trailer, the car in question looked virtually the same as the current W222 generation in the S500 flavor, but with add-ons slapped onto the front and rear fenders using rivets. 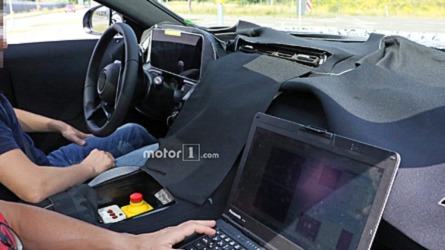 Have A Look Inside The Next-Generation Mercedes S-Class 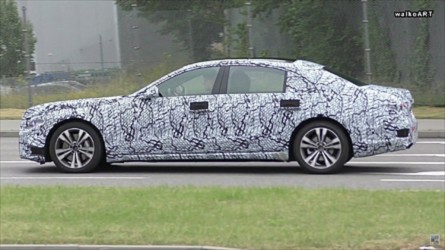 One plausible scenario is that we are actually dealing with an early sign of the next S-Class due to come out likely at the end of the decade, possibly with wider tracks as evidenced by the modifications implemented on this car. Another possible clue that might reveal the car’s true identity can be found by looking at the wheels as there seems to be a significant gap around both front and rear wheels, which may or may not indicate Mercedes is using the car to test a suspension system.

Latest spy video comes only a few months after a mild refresh applied to the current-gen model and goes to show engineers are not taking any breaks. There’s always room for improvements in the car industry, even when dealing with one of the most technologically advanced models money can buy. With the next-gen being at least a couple of years away, it goes without saying details are scarce right now about what Mercedes has in tow for the W223.

Even so, we’ve heard through the grapevine the long-wheelbase sedan will adopt the front and rear styling of the coupe to give birth to a four-door SEC with a heavily raked roof, but nothing is official at this point. What we do know for sure is that Mercedes is putting the S-Class on a strict diet by making a more generous use of carbon fiber reinforced plastic (CFRP) and aluminum to shave off weight and consequently boost efficiency.

With autonomous driving technologies being all the rage these days, expect the S-Class to get a level 3-compatible system to rival Audi’s new A8 technological tour de force.