Could This Be The New Ford Mustang Bullitt Spied In Chicago?

There is very strong evidence to suggest this is the real deal.

There have been many rumors this year of a new Bullitt Mustang coming out of Ford’s stable. Those rumors are now up a significant notch courtesy of an eagle-eyed Facebook user by the name of Tony Zaleski Jr., who happened upon a green Mustang operating in a very curious manner. To paraphrase the post, Tony was at the Hyatt hotel in Chicago setting up for a trade show and the above car was apparently the subject of a photo shoot. He saw the car upstairs with a police escort, wearing a “white sheet” to cover it up, mostly anyway. Tony managed to grab shots of the uncovered car at the dock level, and judging by the photos it looks like the driver wanted to make a quick getaway.

What makes these shots so interesting is that one of them shows the rear of the car fairly clear, and the rear badge sure does look like the crosshairs design we saw on the last Bullitt. The car also appears to be wearing the proper shade of green, along with the dark gunmetal wheels and a lack of exterior badging, not to mention the missing spoiler – all of which pay homage to the original GT390 movie car from 1968, which ironically was devoid of such things to keep it low-key in the film. 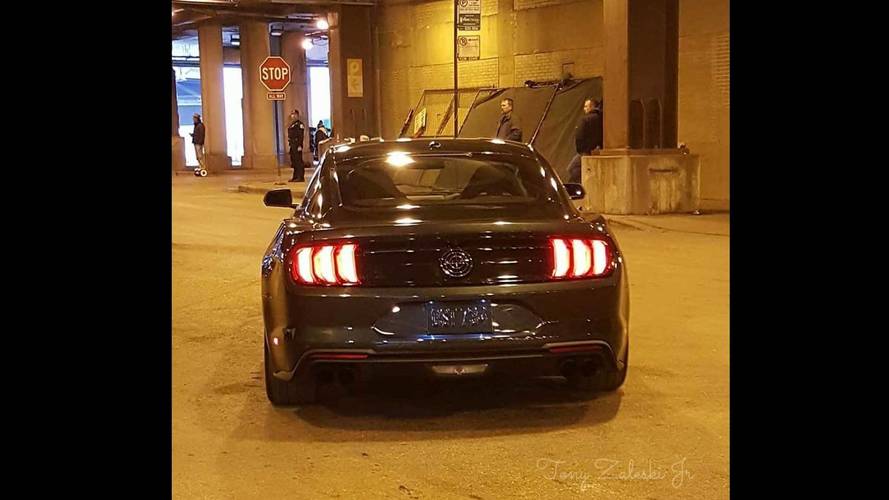 It’s been nearly 10 years since Ford offered up a special edition Mustang Bullitt. In addition to the appearance updates, the last Bullitt model also received minor performance tweaks in the form of a 15-horsepower engine upgrade kit and a revised suspension package. Should this in fact be a new Bullitt, similar enhancements would also be likely. And since the last Bullitt Mustang came out in 2009, one could easily argue that Ford is certainly overdue.

If that’s not enough to convince you, consider that 2018 will be the 50th anniversary for the legendary 1968 Steve McQueen flic from which this car stems. That’s a not-at-all insignificant milestone to honor, and if this was indeed Ford conducting a Bullitt photo shoot, it would suggest some kind of reveal is just around the corner.