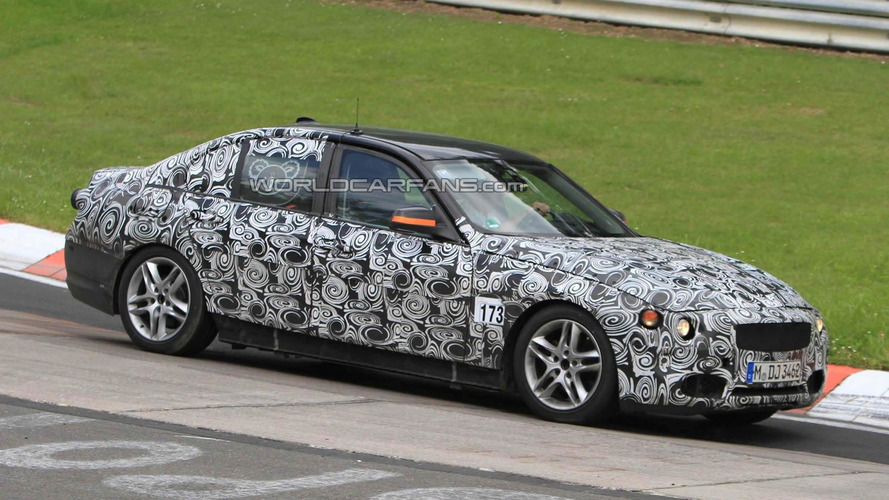 Get the full skinny on the 2012 BMW 3-Series Sedan, and a new set of spy photos to boot! Details inside.

Spies in Germany caught a new series of photos featuring the next-generation BMW 3-Series.  Though the car is seen with loads of camouflage and dummy equipment, we do get a few ideas of what the 2012 model year 3er will show off.

The F30 3-Series Sedan is expected to have a longer wheelbase than the current E90 model, possibly stretched out to 2.8-meters (110.2-inches) in length.  This would continue the BMW trend, where every successive 3-Series generation has a longer wheelbase than the previous.  This aspect of the car may be countered with shorter overhangs, though it is hard to tell what is real and what is padding on the prototype.

On this car, the connection between the rear windscreen and the rear end looks a bit smoother, and less bold than the notch on the E90.  We can only hope that the cute fuzzy teddybear sunshade will come standard on the car.

Little is known about the range of engines for the car, though the M3 is expected to make use of a straight-six turbocharged engine producing 450 horsepower (336 kW / 456 PS).  BMW will likely make their new eight-speed automatic transmission available on the car, as well as a six-speed manual.  Helping speed things along should be EfficientDynamics equipment, which could be standard on the M-Badged car, and built into the M-Sports package for the 3er.  Aside from stop/start, regenerative braking, and active aerodynamics, the car could also see a solar roof, and a powertrain pre-heating system.