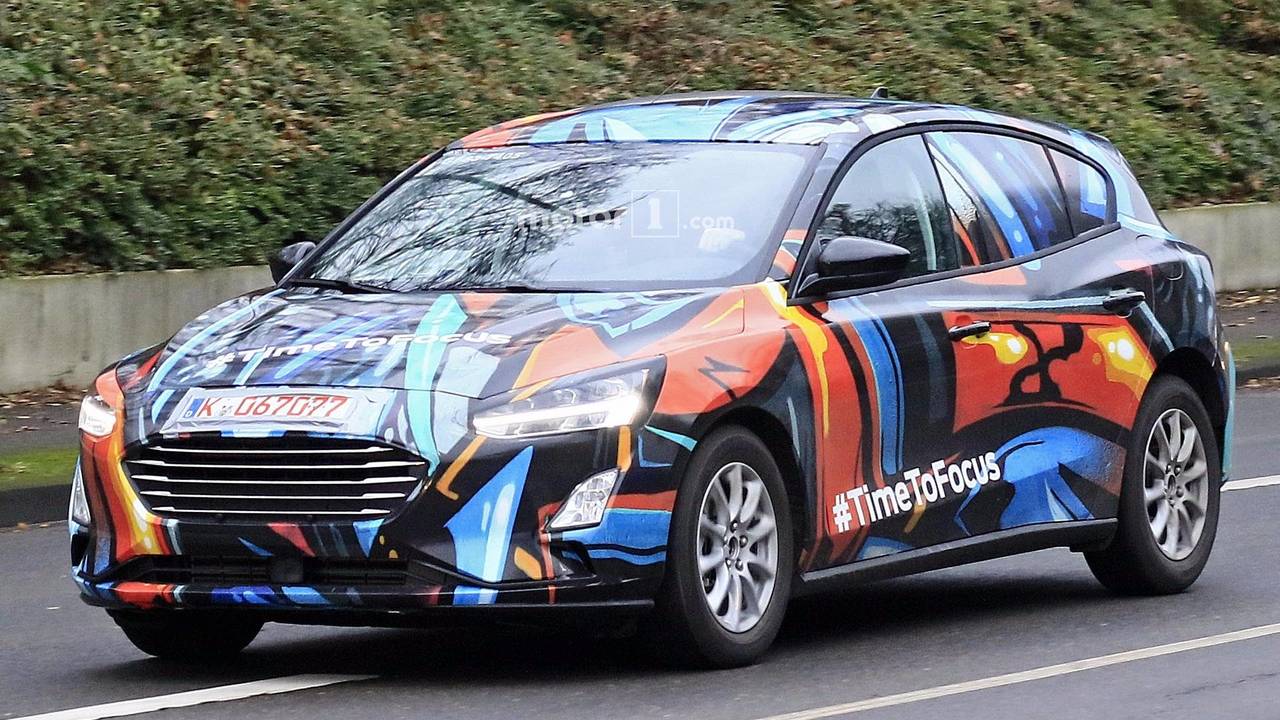 Random fact: the fuel cap has been moved to the left side.

One of the most popular cars in the world is about to make the transition towards its fourth generation and has been spotted undergoing final testing in Cologne, Germany where the new Focus will be manufactured for Europe. The near-production prototype had a lively wrap on all of its body panels, though we wouldn’t call it camouflage since the colorful finish does the exact opposite of what camo is supposed to do by attracting attention instead of keeping the car under the radar.

Looking a wee bit sportier than the model it’s about to replace, the next Ford Focus wasn’t shy to show off its fancy LED headlights and overhauled taillights looking all-new and extending onto the tailgate. No longer is the fuel cap sitting on the right side next to the taillight as it has been moved on the left closer to the rear door.

Although not obvious, the Focus IV is expected to grow in size, particularly in terms of the wheelbase’s length likely set to be elongated to free up more space inside the cabin. The outgoing model isn’t particularly roomy for rear passengers, so the extra length between the two axles should address that issue. Chances are a boost in the trunk’s capacity is also on the agenda, which will come as good news as the Focus III hasn’t exactly excelled in that area.

Despite not having clear spy shots of the interior cabin in the adjacent set, we do get the chance to catch a glimpse of the standalone infotainment system in the same vein as the Fiesta’s setup. That red emergency button on the top of the dashboard is only there on test vehicles in case something goes terribly wrong.

Considering Ford didn’t even bother to properly camouflage the prototype, it likely means an official reveal is nearby. There are a couple of plausible scenarios, either next month at NAIAS in Detroit or in March during the Geneva show. Following the hatchback’s reveal, the Blue Oval will diversify the portfolio by introducing the wagon and sedan, both of which have been spied testing out in the open several times. A crossover-esque Focus Active similar to the Fiesta Active is in the offing to further spice up the range.

For the U.S. market, Ford’s original plan was to switch production from the Michigan Assembly Plant to Mexico, but the company has had a change of heart and will assemble the U.S.-spec model in China. There’s going to be a significant hiatus as far as production for the U.S. market is concerned, as although assembly of the Focus III at the Michigan plant will come to an end in the middle of next year, it won’t be until sometime in 2019 when the Focus IV in U.S. flavor will hit the assembly line in the People’s Republic.