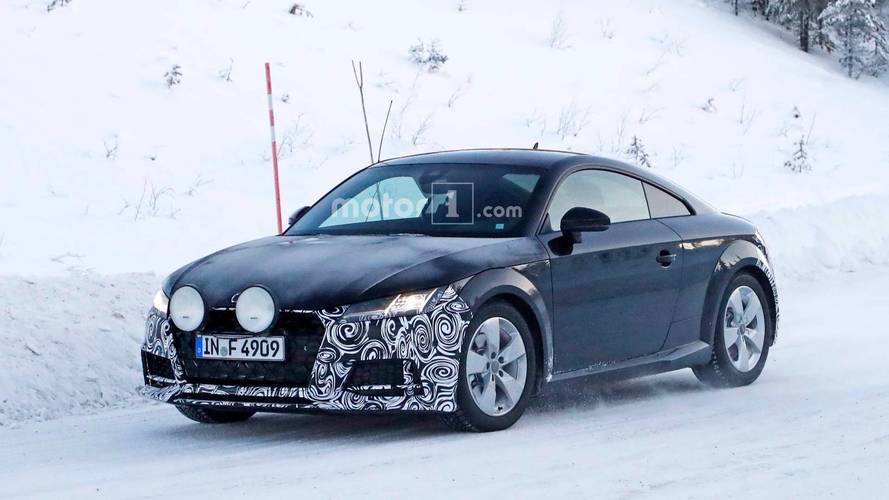 We also caught the Roadster testing with an RS wing.

As much as we’d love to say this current batch of spy photos reveals Audi’s grand return to the world of rally, sadly it’s not the case. At least, we don’t think it’s the case – we haven’t heard anything to suggest otherwise, but the TT Coupe sporting a pair of off-road lamps rally-style on the front clip sure hits us right in the feels. It’s almost enough to distract us from the lightly camouflaged fascia, which will be getting a slight update along with the rear fasica for the upcoming model year.

The updates appear to be similar to what we just saw on the recent batch of TT RS spy shots. The standard TT will no doubt have a slightly less aggressive bite up front, and we don’t see the RS diffuser in the rear. This car also isn’t wearing any camo wrap on the side like the RS; a very close look at the Coupe suggests the RS will have thicker side sills with possibly a bit of extra flash down low.

In addition to the TT Coupe getting its rally on, we have another set of spy shots that show both the Coupe and TT Roadster. The Coupe is once again caught in the snow, this time at night and without any camo wrap on the headlights, suggesting the RS will be getting something a bit different. The same goes for the Roadster, which is at least enjoying life on a wet road instead of snowpack. The camo wrap on the fascia doesn’t hide the changes to the air intakes from the current model, and don’t let that massive wing fool you into thinking a droptrop RS is coming – the round exhaust tips say this car has the standard powertrain.

Speaking of which, there’s no word on whether the TT will receive mechanical updates. The current model offers 220 horsepower from its 2.0-liter mill, managed by a six-speed dual-clutch automatic that sends power to all four wheels. That’s enough to make the small TT quite lively, with the 400-horsepower RS the hot tamale in the lineup.