Porsche Mission E Spied Getting A Winter Workout In The Snow 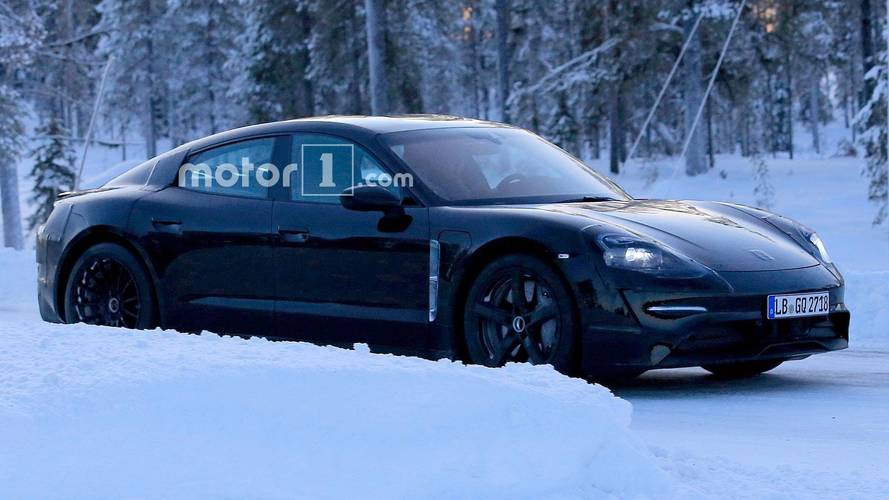 Porsche is swinging for the fences with its first dedicated EV.

As Porsche prepares to have the Mission E ready for production by 2020, new spy shots from winter testing show a mule with a somewhat more production-ready appearance. Putting fake exhaust tips on the back of the electric sedan is an especially cheeky touch.

Rather than the swirling camouflage that many automaker’s use on their test mules, Porsche prefers to equip vehicles with simple, black panels. The pieces make it even harder to determine what parts are for production and which bits are prototype components. Here, the coverings over the headlights, C-pillars, and much of the rear indicate that these sections aren’t final yet.

The general shape of this test mule suggests that Porsche is keeping the production version close to the look of the concept. A sleek silhouette gives the Mission E a family resemblance with the Panamera.

The Mission E will be Porsche’s first dedicated EV to hit the market. The concept promised a vehicle with 590 horsepower (400 kilowatts) and the ability to reach 60 miles per hour (96 kilometers per hour) in less than 3.5 seconds. The sedan had an estimated driving range of 310 miles (500 kilometers) in the notoriously optimistic NEDC test.

According to Porsche, the Mission E will have a starting cost in line with an entry-level Panamera, which will give it a base price around $85,000. The company will offer multiple power outputs, so buyers will easily be able to spend more money on the model.

The Mission E will be just the beginning of Porsche’s fully electric models. According to rumors, EV variants of the Panamera and Cayenne will follow it, but they’ll potentially only be available in specific markets – like China.