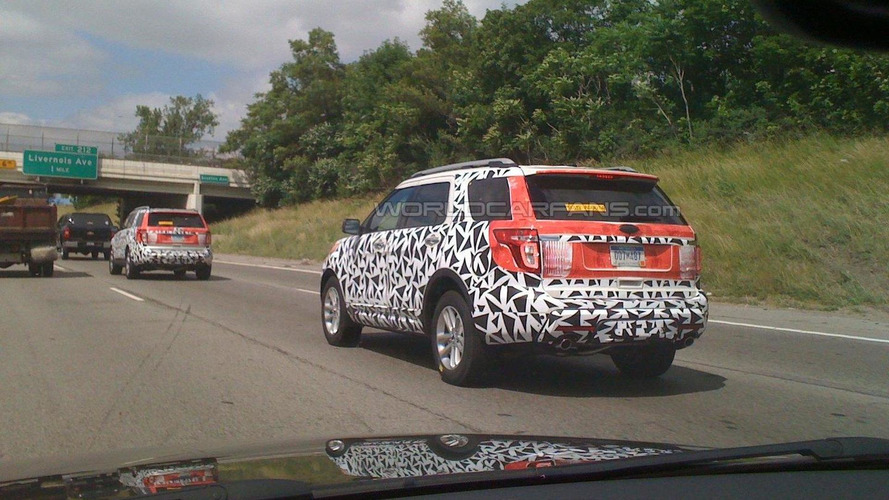 A WCF reader has managed to capture several images of the redesigned Ford Explorer in Metro-Detroit. See the pictures inside.

A WCF reader has managed to capture several images of the redesigned 2011 Ford Explorer in Metro-Detroit.

While the prototype is still camouflaged, we can clearly see the Explorer resembles an Edge on steroids. Styling details include Fusion-inspired taillights, a roof-mounted spoiler, flared wheel arches, and a dual-exhaust system. The front end, which was previously spied undisguised, boasts a five-bar grille, projector-beam headlights, and large fog lights.

Under the clamshell hood, engine options will include a 2.0-liter EcoBoost four-cylinder and a 3.5-liter EcoBoost V6 with 355 hp (265 kW / 360 PS) and 350 lb-ft (474 Nm) of torque. The company has been mum on details, but previously stated the 2.0-liter EcoBoost will deliver "best-in-class fuel economy and V6 performance."

As you may recall, Ford will likely unveil the Explorer on Facebook. To build up hype for such an event, the company has released a barrage of ambiguous teaser images in additon to three new images (attached) posted on Friday to excite consumers and provoke reactions along the lines of, "OMG, it's got a center console and a rear dome light... I'm SOOOOOO buying one."