These Were The Best Spy Shots In November

Were we spying on the Mercedes SLS AMG Electric Drive or was the electric supercar spying on us?

If you’re not a big fan of four-cylinder Porsches, you will be happy to hear the 718 Cayman GT4 will be blessed with a flat-six slated to have somewhere in the region 400 horsepower. It was spotted undergoing final testing with an aggressive body boasting numerous aerodynamic tweaks, including a big wing at the back. The prototype also had a reworked diffuser hosting the two exhaust tips no longer sitting next to each other in the middle of the bumper like they do on the old version.

Breaking news! The new Mercedes G-Class will look very much like a G-Class, but don’t let the old-school boxy design trick you into believing it’s going to be the same car. Wider than the outgoing W463 model, the next G will feature an independent front suspension and a roomier cabin, while an inline-six diesel is in the offing. Also on the agenda are a mild hybrid setup and an electro-mechanical rack and pinion setup. A biturbo 4.0-liter V8 from AMG should be enough for those in need of more power. Will there be a new V12-propelled G65? Maybe, maybe not.

So you’re a fan of the VW Golf GTI but you want a bigger trunk? This is where the Jetta GLI comes into play and you’ll be able to buy this car in roughly about a year from now, sans the camouflage. The regular Jetta has been confirmed for a NAIAS debut in January and VW has already announced the hot-flavored GLI will be introduced about 12 months later, complete with a six-speed manual gearbox you can’t have on the outgoing 2018 Jetta GLI. Its replacement will be all-new as it will ride on the MQB platform. By the looks of it, the next compact sedan will be considerably bigger.

Believe the hype. The BMW 8 Series is finally coming back after a long hiatus and is going to spawn an M8 you’ll actually be able to buy this time around unlike the original M8, which was only a prototype. Seen here riding low at the Nürburgring, the sporty coupe was hiding its swoopy roofline and big air vents underneath a full camo concealing most of the production-ready body panels. Expect it to have at least 600 horsepower coming from BMW’s latest and greatest biturbo 4.4-liter V8 engine.

It will take a while before Ferrari will have an SUV to call its own, so the next best thing is going to be this. Maserati will give its Levante the GTS treatment with a Ferrari-built 3.8-liter V8 engine borrowed from the Quattroporte GTS where it produces 523 horsepower and 524 pound-feet (710 Newton-meters) of torque. Despite the camouflage, it’s obvious the new performance version of the SUV will adopt a more aggressive appearance to match its newly gained prancing horsepower.

It looks exactly like the SLS AMG Electric Drive, but looks can be deceiving. Underneath the familiar body could be hiding an entirely different car as Mercedes-AMG has admitted fully electric performance cars are on the agenda and this might be a test bed. Taking the zero-emissions coupe out of retirement seems rather odd, but we’re sure there’s a perfectly good explanation and hopefully we’ll have an answer. The cameras, sensors, and LIDAR modules are also pieces of the puzzle.

A nice surprise, the beginning of November brought us the first fully revealing images of the Mercedes A-Class, showing a prototype of the hatchback dressed in orange attire. Likely built for crash testing purposes, the five-door model was sitting back to back with the first-ever A-Class Sedan, which will allow the CLA to move more upmarket so that it won’t step on the conventional sedan’s toes.

Besides plotting a Cayman GT4, the folks over at Porsche are also putting the finishing touches on the 718 Boxster Spyder. The hottest Boxster of them all will allegedly source the 4.0-liter engine from the 911 GT3 and that should give it at least 400 horsepower. Since it was caught by the spy camera virtually undisguised, it means an official reveal is right around the corner. To shave off weight, Porsche will install a manually retractable soft top replacing the heavier electric setup of the regular Boxster.

The world of super-luxury SUVs will expand next year with the Rolls-Royce “Project Cullinan.” Set to receive a different name, the luxobarge from Goodwood will sit above the Bentley Bentayga and Range Rover SVAutobiography and will have a hefty price tag to reflect its status. Based on the new Phantom, the opulent SUV will use the familiar biturbo 6.75-liter V12 inherited from the stately sedan.

Here’s something that you don’t get to see every day. A lavish convertible being driven on a snowy road at temperatures of around -10 Celsius (-10 Fahrenheit). Bentley was perfecting the new Continental GTC and we are going to assume the heated seats were running at full blast to keep the test driver and his colleague warm and comfortable. The light amount of camouflage allows us to see the convertible’s design will represent a subtle transition from the coupe - not that we were expecting something else.

The S7 Sportback isn’t even out yet, but even so it seems Audi is in a hurry to test the RS7 judging by the RS-specific oval exhaust tips and the wider wheel arches. The test vehicle was spied in Spain with a lowered sports suspension and fat tires wrapping the black alloy wheels. Underneath the hood was probably the biturbo 4.0-liter V8, complete with approximately 650 hp. A hybrid version is rumored to follow later in the model’s life cycle with about 700 hp.

In an unusual move, the BMW X5 will skip the typical mid-cycle refresh to make the transition towards a new generation. It was spotted up close by our spies and it might have been an M Performance version (X5 M50i?) judging by the big exhaust tips and the blue brake calipers at the front axle. The disguise applied onto the front bumper was likely there to hide some big air vents necessary to cool the powerful engine.

The F-Type SVR in SUV form? Why yes, Jaguar will soon come out with an F-Pace SVR featuring a supercharged V8 engine generating well over 500 horsepower. It was seen carrying extra layers of camouflage on the front bumper to hide what will be enlarged air vents. Something interesting was also going on with the front fenders, which might’ve had some cooling slats for the brakes. At the back, a quad exhaust system was in charge of providing the raspy soundtrack.

Another prototype caught without even the smallest piece of camouflage was the second-generation Hyundai FCEV. The 163-horsepower SUV doesn’t have a name yet (or at least not that we know of), but the company has detailed the fuel cell system, which will have a 60-percent efficiency or 9% higher compared to the ix35 / Tucson FCEV. Between two hydrogen refueling stops, the model will be able to travel for around 360 miles (580 kilometers).

The colorful camouflage Ford decided to slap onto the new Focus makes the five-door compact hatchback more visible rather than keeping it under the radar. It seems the design is going through some pretty important changes as the body appears to adopt a sleeker appearance and what looks to be a visible jump in size. The near-production prototype likely had full-LED headlights flanking a new front grille moved slightly lower than it is now on the outgoing Focus. 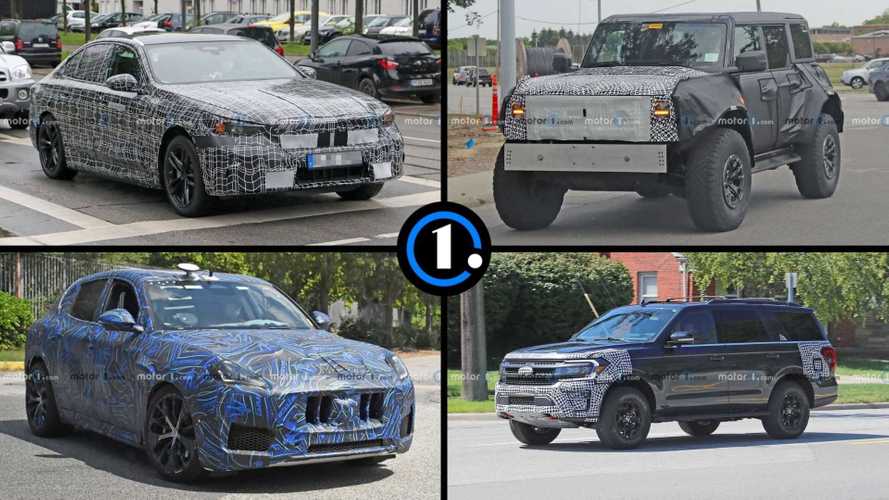 It’s safe to say November was a fruitful month in terms of spy shots as it allowed us to see a naked 2018 A-Class and also catch a first glimpse of the next-generation Audi RS7 Sportback. In addition, Mercedes dusted off the defunct SLS AMG Electric Drive and gave it a high-tech array of accessories consisting of cameras and sensors glued all over the body. Why? Your guess is as good as ours.

Rolls-Royce’s first-ever SUV was also spotted with less camouflage than ever on its sumptuous body, while an entire different SUV was immortalized by the spy camera as well. We are talking about Hyundai’s next fuel cell car, which was seen without even an ounce of camouflage on its futuristic body with door handles that pop out.

Other notable mentions include the first sighting of the all-new VW Jetta GLI, the retro-flavored Mercedes G-Class, and a hot Porsche duo consisting of the Boxster Spyder and Cayman GT4. Maserati was also seen testing the V8-powered Levante GTS and BMW was out and about evaluating the new X5 quite possibly in a spicy M Performance version.

Oh, and who can forget about the Bentley Continental GTC being tested in a winter scenery with the roof down?