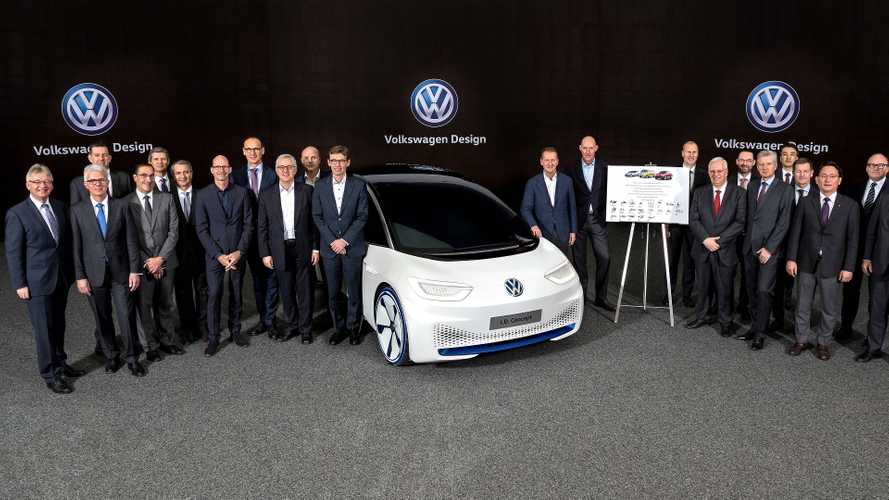 Everything with the future I.D. models goes on plan, VW says.

Volkswagen continues preparations for “the largest product and technology offensive in the history” of the automaker by signing an agreement based on partnership with key suppliers at the MEB Supplier Summit. The company’s first model from the upcoming I.D. family will be a compact electric hatchback, which is scheduled for a launch from the end of 2019. The production should start in 100 weeks from now.

The agreement was signed by Dr. Herbert Diess, Volkswagen brand CEO, who confirmed the “preparations for entry to the new era of affordable e-mobility are well underway.” He also announced VW wants to turn its Zwickau plant in Saxony, where the I.D. will be manufactured, into “the largest European e-mobility center.”

Volkswagen’s ambitious electric plans include no less than 20 all-electric models by 2022, while the Volkswagen Group as a whole wants to launch 32 models based on the new MEB platform throughout the world in the next five years. In 2020, more than 100,000 MEB-based Volkswagens should be already produced.

"We have significantly reduced the complexity of the I.D. project and shortened the product creation process by 11 months,” Christian Senger, Vice President Product Line e-Mobility at Volkswagen, commented.

The MEB architecture is an entirely new platform made especially with electrified and purely electric vehicles in mind. The future MEB-based cars will be built in cooperation with more than 100 supplier companies and the automaker has already signed agreements with most of them. “We are involving top suppliers in development work on the I.D. project considerably more intensively and at a significantly earlier stage," Ralf Brandstätter, Board of Management Member responsible for Procurement, reassured.

The I.D. hatchback will be followed by the I.D. Buzz and I.D. Cross models, which will be introduced in a short interval of time from 2020 onwards. The electric lineup of Volkswagen will be offered in Europe, China, and the United States.

The largest product and technology offensive in the history of the Volkswagen brand is now taking shape. 100 weeks ahead of the planned start of production of the first model in the I.D. family, the brand Board of Management agreed on milestones in the run-up to production with key suppliers at the "MEB Supplier Summit". The first vehicle based on the new modular electric drive kit (MEB) is to be the compact all-electric Volkswagen I.D.1) which is to roll off the production line at the Zwickau plant in Saxony from the end of 2019.

Together with his colleagues on the Board of Management and the top managers of key suppliers, Dr. Herbert Diess, the CEO of the Volkswagen brand, signed an agreement based on partnership to ensure an excellent start of production. Diess: "Our preparations for entry to the new era of affordable e-mobility are well underway. In this unique industrial project, we intend to work together to ensure that Europe is ahead in the global race to the lead in e-mobility. Zwickau will therefore be developing into the largest European e-mobility center. This will enable us to write a new chapter in the history of the automobile."

In the space of five years, the Volkswagen Group brands are to launch a total of 32 models based on the new platform throughout the world. Diess emphasized the dimensions of the project: "We are determined to take the lead. The Volkswagen brand alone will be offering more than 20 all-electric models by 2022 and will be investing about €6 billion in e-mobility over the next five years."

Ralf Brandstätter, Board of Management Member responsible for Procurement, explained: "To date, more than 100 suppliers have already been nominated within the framework of our electric offensive. What I find important is the fact that a new type of cooperation for our partners and Volkswagen begins today - we are involving top suppliers in development work on the I.D. project considerably more intensively and at a significantly earlier stage."

For the introduction of MEB vehicles, Volkswagen is strongly committed to the approach of value sourcing, under which suppliers contribute their ideas for better technical solutions through concept competitions in the early stages of development. Brandstätter: "The added value comes from considerably closer cooperation between equal partners for their mutual benefit."

In 2020, more than 100,000 Volkswagen vehicles are already to be built on the MEB platform, said Christian Senger, Vice President Product Line e-Mobility: "We have significantly reduced the complexity of the I.D. project and shortened the product creation process by 11 months. The new vehicle architecture, autonomous driving and the topics of networking and services will call for a working model involving close networking with all partners and suppliers. The plan for the product has been set out and we will now devote all our energy to implementing it together."

The electric architecture of the MEB is consistently oriented towards the zero-emission digital mobility of the future and has been entirely newly developed. The toolkit includes electric motors with different power ratings, flat batteries in the floorpan with innovative technologies and software features such as smart lighting and head-up displays with augmented reality which were previously only available on premium segment vehicles.

The Volkswagen I.D., I.D. BUZZ and I.D. CROZZ are part of the start-up formation which Volkswagen is introducing at short intervals from 2020 onwards to launch its electric offensive. The new vehicle generation is to be launched in Europe, China and the USA.