Track-Only VW Golf GTI TCR Gets A Facelift For 2018 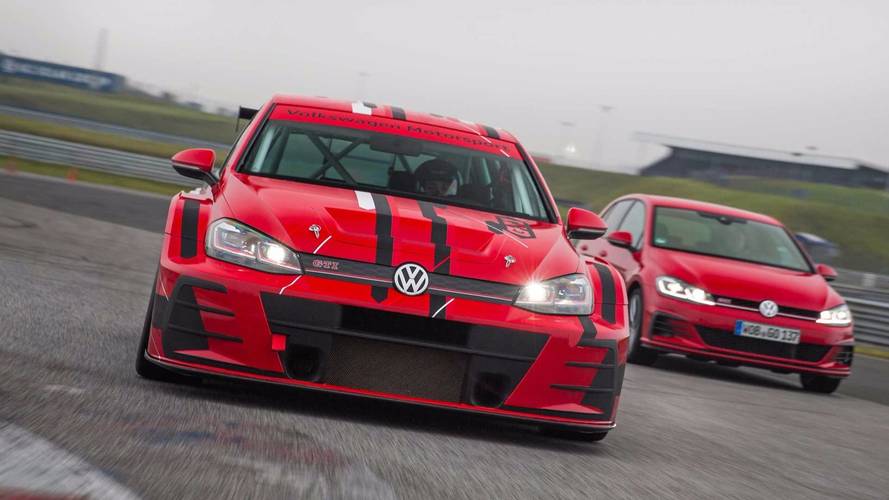 The mechanicals remain the same, but based on its success in the TCR International Series, that’s just fine.

Volkswagen Motorsport fans with have some new eye candy for 2018. The company’s dedicated race version of the Golf GTI – AKA the Golf GTI TCR, will be getting a facelift that more closely resembles the production car. Available only for racing, the GTI TCR sports numerous aerodynamic upgrades with a tuned racing suspension and a 350-horsepower version of the standard 2.0-liter four cylinder. Power still goes to the front wheels, but it’s sent through a six-speed sequential gearbox.

"The new look for the Golf GTI TCR resulted from close cooperation with Volkswagen Design," said Volkswagen Motorsport Director Sven Smeets. "This helps us to underline just what a close relationship exists between the production model and the racing version. For example, the engine comes directly from series production and only requires minimal adjustment for competitive racing. This is proof that the Golf GTI provides the perfect foundation for our customer racing cars."

The car is exclusive to European markets, where it’s made quite a name for itself on the touring car circuit. French driver Jean-Karl Vernay recently captured the driver’s title for the TCR International Series behind the wheel of a GTI TCR, finishing third in the final event of the 2017 season a couple weeks ago in Dubai. The car also claimed a TCR victory in the VLN Endurance Championship, conquering the Nürburgring Nordschleife while also finishing in front of numerous cars boasting more power. It’s also played a role in the success of TCR teams in Asia.

The refreshed Golf GTI TCR won’t feature any mechanical upgrades, but based on its literal track record of success, it doesn’t seem to need anything. In any case, the redesigned car will make its debut at the Essen Motor Show, happening now through December 10.

New design for the motorsport-champion:
Update for the successful Volkswagen Golf GTI TCR

Update for the winning model: the Golf GTI TCR, the successful racing version of the compact sports car from Wolfsburg, is getting a facelift for the 2018 season. The front end has been reworked in the same way as for the production model, increasing the emphasis on the visual similarities and close technical relationship shared by both sporty Golf models.

"The new look for the Golf GTI TCR resulted from close cooperation with Volkswagen Design. This helps us to underline just what a close relationship exists between the production model and the racing version," explains Volkswagen Motorsport Director Sven Smeets. "For example, the engine comes directly from series production and only requires minimal adjustment for competitive racing. This is proof that the Golf GTI provides the perfect foundation for our customer racing cars."

The Golf GTI TCR is one of the most successful racing touring cars of year: in the TCR International Series, French driver Jean-Karl Vernay claimed the drivers' title last weekend in Dubai and the 350 HP racing Golf with the two-litre turbo engine, which Volkswagen provides race-ready for professional teams and drivers, was also declared "Model of the Year".

The Golf GTI also won the TCR class in the VLN Endurance Championship on the Nürburgring Nordschleife (D) and finished ahead of many more powerful cars in the 24-hour race at the same circuit. Kantadhee Kusiri (T) and the Liqui Moly Team Engstler secured the title in the TCR Asia and Francisco Abreu (P) triumphed in the TCR Iberico. An impressive winning record for the Golf GTI TCR, which prevailed at numerous races around the globe, beating strong competition from Honda, Audi, Seat, Alfa Romeo, Opel and Kia.

The new model of the Golf GTI TCR will be ready for delivery from January onwards. The sportiest Golf will make its public debut at the Essen Motor Show from 02 to 10 December. Fans and clients will have the chance to get information about the Golf GTI TCR at booth 6. There will also be a great entertainment programme for the young and the old.

Inseparably associated with Volkswagen is the letter combination GTI – the world's most familiar identifier for sporty compact cars. All GTI-models share the combination of a high level of agility, low weight, stiff yet comfortable running gear, a safe front-wheel drive system and an ergonomically optimal seating position behind a grippy sport steering wheel. Added to these are GTI-specific features like the typical red stripe in the radiator grille and the legendary 'Clark' plaid seat covers.