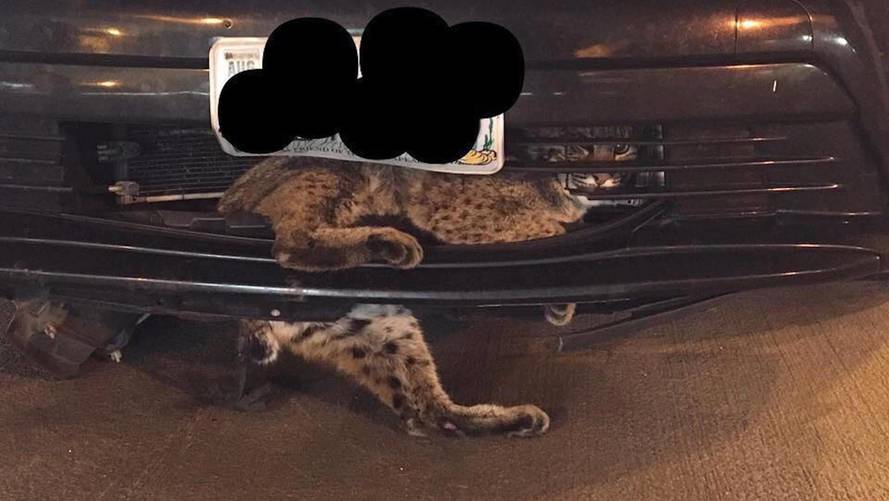 Thankfully, the cat walked away with nothing more than a scratch.

Last week in Virginia, a wild bobcat escaped becoming the latest roadkill casualty after being lodged in the grille of a Toyota Prius and taken for a ride. The incident happened on Thanksgiving morning, and it wasn’t until the driver stopped at her final destination, more than 50 miles away from where she originally started in Gloucester County, did she realize that the cat was embedded in her grille. And still alive.

Needless to say, she quickly grabbed the phone and called police in hopes of saving the cat. Police sent Richmond Animal Care and Control to the scene – and they couldn't believe their eyes. "We got on scene and it really was true. It’s really a bobcat stuck in the front of a Prius grill," said RAAC Director Christie Peters in an interview with WTRV. "When we walked by, he hissed at us, so he’s alive and may be OK, which was so crazy since she drove from Gloucester to VCU."

The bobcat was sedated before being carefully removed from the grille in a matter of minutes. The cat was checked for injuries, but apart from a scratch on his back, appeared to have walked away from the incident almost completely unscathed. "He was completely fine," said Peters. "It’s insane."

The Prius, though, wasn’t so lucky. The car suffered some minor damage to the grille and underbelly. The bobcat is currently being held at a wildlife center in Waynesboro, Virginia to make sure that no serious injuries were sustained, before it will be released back into the wild.